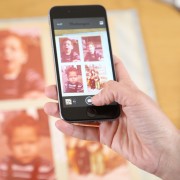 Tel Aviv, Israel, February 22, 2016 (Newswire.com) - Photomyne, an iOS photo app that invites users to quickly scan entire photo albums, save and share them with friends and family, has released its most extensive update yet, version 3.0. Photomyne is one of the top 20 paid photo apps on the App Store.

The new update will offer the app’s audience of over 500,000 users additional photo and album management flexibility such as the ability to reorder photos within an album, move images between albums and set album cover photos. In addition, users will now have more sharing options with a total of five channels to choose from.

Version 3.0 of Photomyne includes ‘Discover,’ a first of its kind visual history feed of re-discovered and shared photos by other Photomyne users. Discover offers an exclusive digital peephole into real life human moments of the past on a global scale.

“We’re very excited about the Discover feed,” said Photomyne CEO Nir Tzemah. “It invites our users to pull their precious nostalgic moments into the digital spotlight, and celebrate those memories with the Photomyne community and beyond. We’ve already received significant positive feedback on Discover from our users.”