Innova Research to Speak on China's Innovation Ecosystem at CSITF 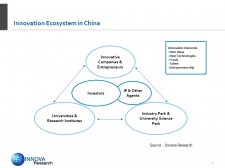 Shanghai, China, April 11, 2017 (Newswire.com) - Innova Research has been invited to deliver a keynote speech on China’s innovation ecosystem at China International Technology Fair, which will be held on 20th – 22th April at Shanghai World Expo Exhibition Center.  The fair and conference, jointly organized by the Ministry of Commerce, the Ministry of Science & Technology, and Shanghai Municipal government, is one of the leading events to showcase newest technology innovations from companies, leading universities and research institutes, among others, in China.

An innovation ecosystem includes key innovators such as universities and research institutes, innovative companies, high-tech industry parks and university science parks, as well as other key players such as IP agents and investors. In China, government plays an important role in the innovation ecosystem as it holds large research funds, policies, and other resources, and all leading Chinese universities and research institutes are state-owned.

One of the main issues with China’s innovation ecosystem is the low commercialization rates of the IPs. In order to push up the IP commercialization rates, the Chinese government has been encouraging university graduates, overseas returned scholars, professors and other researchers to start their own businesses.  It also introduced substantial financial and policies to support these start-ups, which resulted in a wave of startups and a boom of incubators across the country. Nevertheless, the commercialization rate is still low compared with a large number of IPs generated in China each year. This phenomenon is more pronounced in universities and research institutes where commercialization of the IPs remains at a low single-digit percentage.

Richard Jun Li, Vice President of Innova Research and the speaker commented:” One of the main reasons for the low commercialization rates of the IPs among Chinese universities and research institutes is that the performance of the researchers in these institutes are mainly measured on papers they publish, not on the commercialization of the IPs. As a result, research topics are not selected on market needs, and the IPs receive less interest from industry players and investors. Innova Research has conducted multiple consulting projects for Shanghai government to improve the innovation ecosystem in the city, to help the city to achieve its goal to become a world innovation center. “

Innova Research is a market research and consulting firm focusing on emerging technologies. With the combination of both technology and market research experts, we offer world-class market and technology intelligence.  Driven by primary research, Innova Research’s market intelligence reports and consulting service help our clients to make right strategic and investment decisions in the fast-changing technology world.  Visit www.innovaresearchinc.com for more information.