Ingotech introduces their newest innovation via the 'Ingo Glow: World's 1st Glow in Dark Moldable Plastic' project on Indiegogo. The team behind this campaign is crowdfunding to bring this exciting new luminary moldable plastic to market. 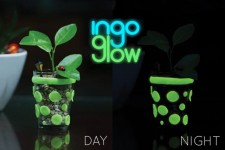 Perth, Western Australia , August 9, 2016 (Newswire.com) - ​​​Ingotech, the brilliant team that brought Ingo moldable plastic to the world, has launched a new crowdfunding campaign on Indiegogo. This campaign has a funding goal of $3000, which needs to be raised in order to bring their newest innovation “Ingo Glow” to market. Ingo Glow is the new version of their highly popular Ingo moldable plastic. Ingo is a biodegradable polymer that is completely non-toxic and moldable when softened in hot water. It was introduced to the public when the team had a successful campaign earlier this year, and they have already delivered the original Ingo to their enthusiastic supporters. After getting rave reviews from the crowd, the team is now ready to introduce version 2: Ingo Glow, a glow-in-the-dark type of their original Ingo moldable plastic.

The Ingo product is handy and pocket-sized, ultra-strong, biodegradable, reusable, and can be quickly heated and molded to practically any shape for immediate application. It can be used to fix virtually anything, such as replacing broken handles on tools, broken drawer handles, replacing a missing bottle cap, creating a portable holder for smartphones and devices, etc. The added bonus of Ingo Glow is that it can also be used to create illumination for something a person wants to keep track of in the dark, or simply for creating fun crafts and jewelry. A person can make a key cap to see their keys at night, attach Ingo Glow to a light switch to help find it in the dark, make fun glow in the dark toys for kids, illuminate a dark passageway, create fun crafts, attach it to a flashlight to make it easier to find in a power outage, or anything they can imagine. Ingo Glow can be used for a vast array of purposes, with the only limitations being a user’s own imagination. It will initially be released in two colors: blue with a green glow, and green with a yellow glow.

"Need to keep track of something in the dark? Looking to make some trendy jewelry for your next concert? Just want to find a little crafty entertainment? Ingo Glow is the perfect solution for all of this and more!"

The team at Ingotech has been working very diligently on all of the essential groundwork for their Ingo Glow and they are now ready to begin the process of bringing it to market which is why they have launched their Indiegogo campaign, and hired a team of crowdfunding specialists to help them spread the word. As an added bonus with this campaign, the team is offering several perks. These perks, which serve as funding incentives, give supporters the opportunity to pre-order Ingo Glow at a substantial savings off of regular retail prices. Supporters can pre-order a single set of 4 bars starting at only $7, or get various multi-packs that also include original Ingo. The team has a projected delivery date starting in September 2016, and since delivery of original Ingo has already taken place, they have no reason to expect delays. Full details can be found on their Indiegogo campaign page.

Ingotech Marketing is a new start-up based in Australia. The team consists of a talented team of professionals who each have substantial experience in their individual areas of expertise. Together, they develop and market innovative products for consumers worldwide. Their newest innovation is Ingo Glow, a glow in the dark form of moldable plastic.

To contact via email write to AK Tan at: admin@ingotech.com.my