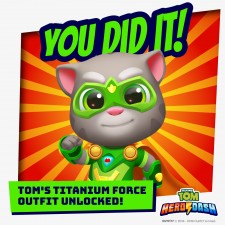 LOS ANGELES, June 3, 2019 (Newswire.com) - Talking Tom Hero Dash, the upcoming superhero-themed endless runner from Outfit7, has achieved a whopping 4.5 million pre-registrations in the run-up to the game’s global release this week. Smashing through the set milestone of 3 million pre-registrations, which were needed to unlock Talking Tom’s exclusive, limited edition Titanium Force outfit for free when the game launches, Talking Tom Hero Dash is off to a “super” start.

Become one of the millions of fans who have already pre-registered for Talking Tom Hero Dash and sign up now to join Talking Tom and Friends on their action-packed new adventure. Download the game by June 20 to defeat the racoons, save the world, and receive a Titanium Force outfit for free!

For a sneak peek at what to expect when the game launches, check out the brand new trailer for Talking Tom Hero Dash here: https://www.youtube.com/watch?v=5kbqsZHRDFY.

Outfit7 Limited is one of the world’s fastest-growing multinational family entertainment companies. The company is best known for its flagship franchise Talking Tom and Friends, which became an overnight global sensation when it launched in 2010. In the years since, Outfit7 has expanded its portfolio to include a suite of award-winning games, a 3D CGI animated series, digital video content, chart-topping music videos and a licensing program in order to meet the amazing demand of its fans. In fact, Outfit7’s games have now been downloaded over 9 billion times in total and up to 350 million fans play with them every month. It’s game on, world. For more information, please visit www.outfit7.com.