In the Badlands of Crypto, Doc Curecoin Calmly Shows 4 Aces and Reaches #1 at Stanford University's Folding@Home 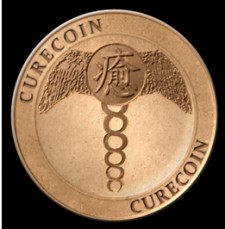 SAN FRANCISCO, September 2, 2017 (Newswire.com) - Doc CureCoin is interviewed by the Badlands Telegraph (BT) in the Wild West era of cryptocurrencies. In this first interview of Doc Curecoin, he plays a high hand at poker with 4 aces. Doc is a country doctor, and tells how the CureCoin Team, a group participating and competing within the Stanford Folding at Home (FAH) project, announced that the CureCoin (CURE) network moved into the #1 position, besting the former leader, folding@evga, in cumulative points on August 29, 2017.

(See the glossary below to look up some of Doc CureCoin’s vocabulary.)

BT: How did CURE become the #1 folding team in both cumulative and daily points?

A♠ Doc: I must let out that Curecoin is an important incentive to do this research on diseases with somethin’ called “computers.” In fact, it’s darn near like mining with a gold pan, but less sweaty, and with no mosquitoes. By awarding CureCoins, this compensation puts these miners, er, “folders,” in apple pie order by helping offset a ranch hand’s electricity and equipment costs. If held for longer periods, the CURE tokens received may become more valuable than the scratch spent producing the protein simulations. The CURE team currently has above 1,100 active participants and produces over 40% of the FAH 72,000 teraflops of computational research. CURE, only 39 months old, took the lead after 17 years of FAH history with hundreds of teams participating around the world. Keep the pot a boilin’, boys and girls!

In addition to CURE, another token, FoldingCoin, has lent a cool hand in helping CURE to achieve the top spot at FAH, and this additional digital gold is available optionally to members of the CureCoin bee, if the username is set up properly. Bully for you, FoldingCoin, for this great help!

Since Stanford estimates the difficulty of the work units that are assigned, and the CURE issued based on how many points are awarded by Stanford for the completed work units, the process is as fair as a Gotham judge.

CureCoin (CURE) is like gold dust that may be spent with anyone who accepts it as payment, including a person with almost any computer, and over 310,000 store owners all around the world, through a service at Coinpayments.net. CURE has a value that is expressed in Bitcoin, and is traded on exchanges. Since Bitcoin is traded in markets and is expressed in national currencies such as the U.S. Dollar, CURE has a value that fluctuates versus the Lincoln Skin. Like Bitcoin, its total issuance is limited by mathematics over time. Investors and speculators buy CureCoins hoping that it will become a more important currency for funding that hospital, and for facilitatin’ payments to doctors and their potion salesman. Even though a lot of gamblers think that CURE is dog cheap right now, and some think the price will hit pay dirt, anyone buying CURE could burn their fingers, so only buy it if you can afford a losing hand. Even so, today one CureCoin is worth more than a U.S. pistareen, while in 2015 it was only about a U.S. copper penny.

CureCoin is so easy to use. Whether you are a galvanized Yankee, a mail-order cowboy, a mouthpiece, a nipper, a mugwump, a gay cat, an old pod, a shaver, or the old scratch hisself, get a wiggle on to help fold, because we need to cure some of the burg’s ills. To the school marms out there in the Badlands, why don’t you teach about blockchains to the little rascals? If you do, I reckon fewer will end up on the chain gangs.

This vaquero named Josh Smith, that some call the biggest toad in the puddle, and hearsay is the founding CureCoin developer, told a young cowhand the other day that “We are always excited to see newcomers to the Folding@Home project, especially if they choose the CureCoin team. Thank you for helping us to become the #1 team in cumulative points.” I can’t hardly unnerstand half his high-falutin’ blusteration. Still, a little bumblebee whiskey couldn’t hurt much on this fine day.

BT: Why is this simulated protein folding important?

A♥ Doc: The FAH research project has resulted in 139 screaming academic papers on topics such as various cancers, Alzheimer’s, Parkinson’s, ALS, HIV, and many other deadly infectious diseases, along with improvements within the field of biology. Sometimes it is helpful in the development of potions to give my patients.

BT: Who does this protein folding?

A♦ Doc: Stanford University’s Folding@Home (FAH) is a “distributed computing network” and the protein folding takes place on thousands of computers located in people’s homes, offices, and on Amazon Web Services as well as Google servers. Computers with graphics processing units (GPUs) do the most work in these protein simulations. Windows, Apple, and Linux operating systems, including Android, are used. The dyed-in-the-wool components are pricey graphics cards, which are mainly found on those newfangled gaming computers that kids use.

Ya know, we sure could use more sage hens on our wagon - no need to swing a hammer in a mine, so all are welcome.

BT: What does the future hold?

A♣ Doc: Maxwell Sanchez, a blockchain security dabster, and Mr. Josh’s wheel-horse, buckled up to working on CureCoin version 2.0, which is designed to be resistant to security attacks by quantum computers, once they are in our neck of the woods. Burn the breeze, Max, show ‘em how it’s done!  We are also working on setting up a team to do protein folding at GPUGRID.net.

Steven Saxton, the developer of Evergreen Coin, has been improving the interface for controlling the Proof-of-Stake in the current Curecoin wallet. Thanks a hundred pieces of silver, Steven!

CURE is one of a whole heap of blockchains, but the first blockchain was Bitcoin, and it is the marrying of three fields of study - maths, computer science, and economics. Cryptography is a branch of mathematics, and Bitcoin implements some of the most brilliant cryptographic research done over the last century for the very first time. Since the field of computer science was begun in earnest during WWII, no group of technologies of equivalent importance to blockchains has been implemented other than perhaps the development of the internet. The economics of blockchains enable networks to afford automatic, independently verifiable ledgers between many people of both financial and non-financial information for the first time in history. The extremely bright minds of today stand on the shoulders of giants who have been engaged in these three fields over the last century. Blockchains will change the life of near every man, woman, and child on the face of the planet, likely hittin’ full steam ‘round about five years hence.

BT: Why are there so many bad characters in crypto, and why do we call this the wild west in crypto currencies?

7♣  Doc: The tear squeezer is that whenever a new technology comes around, the criminals may have the most to gain by using it at first, since they can bypass the law by sneaking around unnoticed, or by outgunning the sheriff, and keep doin’ their evil deeds to the good citizens. They spend most of their time among the willows, but many of us would like to see those bad hosses ride out on a rail. Indeed, the sheriff does learn to protect the publick from the mal effects of the new technology eventually, but usually starts out behind the eight ball.

The majority of the blockchains are not that way, and are used for legal purposes. A few walk like a gentleman, including CURE, with the aim of making the world a better place. We hope to solve many of the worst medical ailments over time. Blockchains are still quite young, and developers are working on ways to make them both easier to use, and have less risk of loss. Don’t attitudinize over crypto – buck up, there’s a heap of great things, and one day you might not need a book keeper for your ranch no more, and you might get a cattle loan from your neighbors and pay less interest that the bank man charges. Those who just bat their eyes at crypto will be missing some mighty good opportunities.

Many people think of this phase of cryptocurrencies as equivalent to the wild west because there are opportunities of almost unimaginable portion, and apparent chaos typically surrounds such moments. In the same way that the American frontiers were opened up for some and closed off to others during the late 19th century and people and companies staked their claims to land and other assets, so too do blockchains promise to revolutionize ‘most every field of intellectual endeavor, and most mechanical and software systems. They will change jobs for the executive, middle management, and for the clerks. There are scores of brilliant computer software developers who even leave college early to contribute meaningfully to this technology, for they know that their career may never again hold such promise. Sorry if I whaled away at you for too long.

Among the Willows: Dodging the law

Attitudinize: To assume an affected attitude

Badlands: From a French term meaning “bad country for travel.”

Bat Their Eyes: A gambler’s term for men who look on, but don’t play

Bee: A gathering of friends, family and neighbors to get a specific job done.

Behind the Eight Ball: When a player in pool game of eight-ball has no shot because the cue ball is stuck behind the 8-ball, stuck in a bad situation

Biggest Toad in the Puddle: The most important person in a group

Blockchains: A blockchain – originally block chain – is a continuously growing list of records, called blocks, which are linked and secured using cryptography.

Blusteration: The noise of a braggart

Bumblebee Whiskey: Whiskey which is strong enough to sting

Buck Up: Cheer up, chin up

Buckle Up: Set about any task with energy and a determination

Crypto: Cryptographic Currency, or cryptocurrency, a digital currency in which encryption techniques are used to regulate the generation of units of currency and verify the transfer of funds, operating independently of a central bank.

Dabster: One who is expert in anything, a proficient

Galvanized Yankee: Former Confederate soldier who served in the U.S. Army in the West following the Civil War

Gay Cat: One who cases banks and towns for future jobs

Get a Wiggle On: Hurry

Hit Pay Dirt: Mining term. To find something of value

Keep the Pot a boilin’: Keep it going

Let Out: To begin a story or narrative

Mail-Order Cowboy: A derogatory term used to chide tenderfoot, urban “cowboys” who arrived from the East all decked out in fancy but hardly practical Western garb

Nipper: A baby or small child

Pistareen: One-fifth of a dollar, formerly of the United States, of the value of twenty cents.

Ride out on a Rail: To be forced to leave town

Shaver: A child or young person of either sex

Vaquero: A cowboy or herdsman (from Spanish)

Whale Away: To preach, to talk or lecture continuously or vehemently 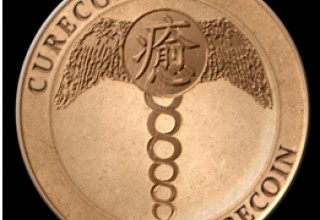 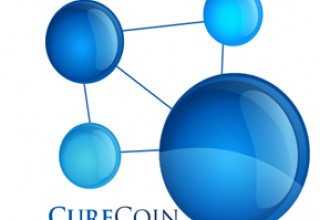 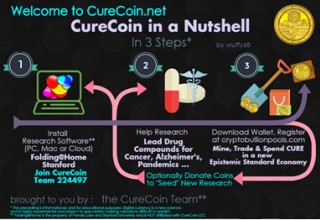 Curecoin Protein Folding Rewards Halving as Scheduled
As of May 10, 2018, the Curecoin folding team has passed the first block halving, essentially cutting its daily token rewards in half. Details below.
CureCoin - May 25, 2018

Bio Research Loves Curecoin: Gamers and Speculators to Overtake #1 Team
Stanford University's Folding@Home (FAH) is a distributed computing network, open to persons from anywhere in the world who want to join. The CureCoin team, created 39 months ago by Josh Smith, software developer, is poised to overtake the #1 team at FAH on August 29, 2017.
CureCoin - Aug 25, 2017
Newswire