In Final Public Appearance, Illinois Secretary of State Jesse White Spreads the Warmth With Coat and Sock Giveaway for Those in Need

Jesse White will give away 500 coats and 200 socks, donated by Ann Jhin, to the local community. Afterward, a 'Thank You' celebration will be held to honor Jesse White and his accomplishments. 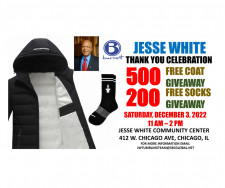 CHICAGO, November 30, 2022 (Newswire.com) - On Saturday, Dec. 3, 2022,  Illinois Secretary of State Jesse White will host his final public appearance with a coat and sock giveaway to those in need at the Jesse White Community Center at 11 a.m. Chicago-based entrepreneur Ann Jhin, CEO of Jinny Beauty Supply, the largest multicultural and ethnic beauty supply distributor in the world, graciously purchased and donated all 500 coats and 200 Bombas socks for this giveaway to the local community. Following the giveaway, there will be a performance by the internationally renowned Jesse White Tumblers, who have been helping impact the lives of thousands of young Illinoisans for more than 60 years. As a "thank you" to Secretary of State Jesse White, who has served for nearly a quarter-century, Eli's Cheesecake will present a celebratory cake in honor of Jesse White's accomplishments throughout his career in Illinois and beyond.

This "Thank You Celebration" will mark Jesse White's final appearance before he departs the political stage. All are welcome to join and celebrate his work with Illinois, the community, and all those that have been impacted by his honorable career. Jesse White is Illinois' 37th Secretary of State. White was first elected to the office in 1998 and won landslide victories in 2002, in which he won all 102 counties, and again in 2006 and 2010. On Nov. 4, 2014, White was re-elected to a record-breaking fifth term, winning another landslide victory by a 2-to-1 margin in which he earned over 2.3 million votes statewide — more than 230,000 votes than any other statewide constitutional candidate. White became Illinois' longest-serving Secretary of State on May 30, 2014.

Before his election as Secretary of State, he played professional baseball with the Chicago Cubs organization, which was followed by a 33-year career with the Chicago public school system as a teacher and administrator. Jesse White also served as Cook County Recorder of Deeds, served 16 years in the Illinois General Assembly and served our country as a paratrooper in the U.S. Army's 101st Airborne Division and as a member of the Illinois National Guard and Reserve.

All are welcome to celebrate Jesse White's "Thank You" Celebration.