The word hunk represents a sexy man, the ² stands for the power of two men. Hunk² creates a product that is the symbol of the confidence and tenacity of two men who decided to be together, to be brave, and to challenge the world. 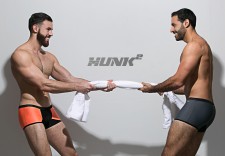 Houston, TX, February 28, 2017 (Newswire.com) - ​Options for men’s underwear have been extremely limited in the past. Designers didn’t seem to have an interest in creating fashionable lines that were also comfortable.  As a result men were limited to either sexy underwear or comfortable underwear and very little in between. Hunk² wants to change all that with their stylish new collection of briefs, thongs, and jockstraps. Hunk² is a new brand of male fashion underwear that delivers high quality underwear in fashions all men can enjoy. But the company’s highlight is their philosophy and how they want to change the way men without ripped bodies feel about themselves.

“We haven’t really seen sexy men’s underwear that is actually top quality and doesn’t have flashy logos everywhere,” says company spokesperson Allen Campbell. “Most of the swimming trunks and underwear are designed for hairless hardbodies and don’t look as good on the average man. When preparing our photoshoot, Eric, one of our models, was a little worried about eating a little extra over his trip to Italy. Our response was unexpected to him. We asked him not to worry and to look natural, to be himself. While showing his athletic body was important, we wanted to show that you can look fantastic without having a six pack; that athletic and confident don’t mean skinny and ripped. We decided to come up with a line that was universally sexy and was also comfortable enough to be worn by the average sexy man—not just totally ripped men. Hunk squared made a conscious choice to create designs for handsome, natural men.”

Hunk² was made without the large logos found on most designer brands, putting the focus back on the style and the wearer.  The underwear is designed in the United States and made out of delicate South American fabrics. Besides sexy boxer briefs and  swimming trunks, Hunk²’s most recent collection also includes jockstraps, and men's thongs  for the more adventurous. The company wanted to stand apart from designer brands being made in China out of inferior fabrics by using those strong nylon and textiles that can be found in South America. The result is sturdy, stylish and sexy underwear that looks and fits perfectly on a man’s body.

From design to fabric to branding Hunk² is revolutionary. It is a company that knows its audience and is marketing directly to men that are actually confident and decided to live a healthy life without going for the strict six-pack look. “When you feel good and look great,” says Allen, “you’re more confident and that’s what Hunk squared is all about.”