How to Solve the Middle East's Water Scarcity: Fanack Water Files on Water Challenges and Solutions in Jordan

As the U.S. considers water scarcity as serious a threat as terrorism and cyberattacks, the Middle East is not immune to this growing water scarcity, due to its harsh climate, poor water management and lack of sharing of information among the regional countries. Fanack Water Files, Water Challenges and Solutions in Jordan is a new report addressing this problem and solutions. 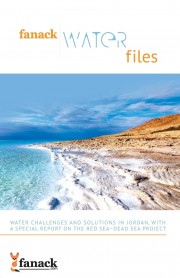 Old Chelsea Station, July 31, 2015 (Newswire.com) - ​​​While the Middle East is on fire, waging wars, experiencing civil unrest and suffering from terrorist attacks, it also faces another silent threat: the scarcity of water. According to the U.N., over 3 billion people around the world face water scarcity and this will be one of the critical problems of the Twenty-first century. Water scarcity causes not only humanitarian or environmental problems, but could result in conflicts between nations. A recent National Intelligence Strategy stated that the U.S. considers water scarcity as serious a threat as weapons of mass destruction, terrorism and cyberattacks. The Middle East is not immune to this growing water scarcity, due to its harsh climate and desertification, poor water management and lack of sharing of information among the regional countries.

Fanack, a Netherlands-based organization, providing analysis of the Middle East and North Africa (MENA) region has made the state of water in the MENA region one of its focal points. Its goal is to aid in the sharing of detailed and reliable information by releasing a series of Fanack Water Files providing in-depth, comprehensive, and balanced information on the state of water resources in the MENA region. Fanack Water Files will cover a range of topics, including water availability and use, pollution and groundwater overexploitation, and alternative sources of water such as seawater desalination.

New York-based publisher, Cosimo is proud to present Fanack’s first publication in this series of Fanack Water Files, Water Challenges and Solutions in Jordan with a Special Report on the Red Sea-Dead See project. This publication deals in-depth with the water situation in Jordan, a country of strategic importance to the region due to its location in the Syrian desert and bordering Iraq, Saudi Arabia, Syria, and Israel. Jordan’s growing water scarcity is caused by increased demand due to rapid population growth and overexploration of water resources in recent decades. The limited water supply is one of the main obstacles to Jordan’s development. This first report addresses possible solutions, such as rainwater harvesting, treated waste water, seawater desalination in the Red Sea and water transfers between the Red Sea and Dead Sea.

In times of global upheaval, growing world population, and increasing evidence of climate change, this report will enlighten policy-makers planning their next policies, business people looking for opportunities and academics looking for concise information on the state of water in Jordan. In essence, it is a report of importance to all stakeholders in a more peaceful and prosperous future for this region and the world.

FANACK is a The Hague, the Netherlands based organization that aims to provide facts about and analysis of the MENA region and its history, society, economy, and culture. Its primary target group is Arab youth, who are exploring their roots and developing their identity in relation to both the Eastern and Western world. Fanack also wants to inform general audiences that seek a better understanding of the region, including policy-makers, business people, academics, students, and tourists. Visit fanack.com and water.fanack.com.

FANACK WATER FILES: Water Challenges and Solutions in Jordan, with a Special Report on the Red Sea-Dead Sea Project

COSIMO BOOKS publishes titles by experts, academics, journalists, and visionaries on topics including Public Affairs, Socially Responsible Business and Personal Development. Cosimo Books, based in New York, is an imprint of Cosimo, Inc., a specialty publisher of books and publications that inspire, inform and engage readers. Cosimo’s mission is to create a smart and sustainable society by connecting people with valuable ideas.

New Book Released: The Supermarket Sorceress by Lexa Roséan
Release of newly revised classic book from the 1990s on how to make your wishes come true with spells, charms and enchantments.
Cosimo, Inc. - Oct 28, 2015
New Book Released: When South Africa Called, We Answered By Danny Schechter, the News Dissector
In this book by award winning journalist Danny Schechter, he reveals the crucial role media played in anti-apartheid achieving worldwide recognition, which enabled outsiders to support the movement. This fascinating history of apartheid is released, just as South Africa celebrated the 20th anniversary of the downfall of apartheid.
Cosimo, Inc. - Feb 19, 2015
Cosimo Co-Sponsoring the Praxis Economics of Sustainability Conference
Praxis Peace Institute Presents "The Economics of Sustainability" Conference on the Intersection of Economics and the Environment.
Cosimo, Inc. - Oct 1, 2014