WASHINGTON, November 10, 2022 (Newswire.com) - It is with great excitement that the Washington Speakers Bureau announces the addition of Bear Grylls - host of 'Man vs. Wild,' 'Running Wild with Bear Grylls,' and double Emmy Award-winning 'You vs. Wild,' Global Adventurer, bestselling Author, and Philanthropist - to their exclusive speaker roster.

"Adding Bear Grylls to our exclusive speaker roster is an honor," explained WSB President Ryan Heil. "His ability to connect with audiences, to share his sense of adventure and story of resilience, and to provide a source of inspiration is remarkable."

Grylls is arguably the most famous face of adventure on the planet. A former British Special Forces soldier, he went on to become one of the youngest-ever climbers of Mt. Everest despite having broken his back just 18 months earlier. Since conquering Everest, Grylls has hosted more extreme adventure TV shows globally than anyone else in history.

His notable TV shows include the legendary Discovery Channel hit 'Man vs. Wild' and 'Running Wild with Bear Grylls,' now in its eighth season on National Geographic Channel. His 'Running Wild' guests have included President Obama, Roger Federer, Julia Roberts, Prime Minister Modi of India, and many others. Grylls also hosts the double Emmy Award-winning interactive Netflix series 'You vs. Wild,' where viewers get to decide what adventure he tackles.

A bestselling author, Grylls has sold over 20 million books. Additionally, he is an Honorary Colonel to the elite Royal Marines Commandos, the youngest ever UK Chief Scout, and the first ever Chief Ambassador to the World Scout Organization, representing a global family of over 55 million young Scouts around the world.

For a life-changing motivational experience that will help you build resilience and overcome any obstacle, book Bear Grylls to speak at your next conference, meeting, or corporate engagement in the U.S. through WSB. To learn more, visit: https://www.wsb.com/speakers/bear-grylls

WSB is the world's largest talent agency focusing solely on the corporate speaking and lecture circuit. For more than 40 years, we have represented the very best keynote speakers from a variety of fields, from fortune 100 CEOs, to athletes, coaches, authors, presidents, prime ministers, and thought leaders. We remain the first choice of the world's pre-eminent speakers through our relentless focus on integrity, discretion, and care for our speakers and our customers. We have been fortunate to have had the pleasure to represent 3 former U.S. Presidents, 6 former British Prime Ministers, 5 former Secretaries of State, iconic authors, business leaders, and countless others of the most impactful voices of the last 40 years.

WSB is the world’s largest talent agency specializing in corporate speaking events. For more than 40 years, the Washington Speakers Bureau has helped connect event hosts with the best keynote speakers in the world. We take pride in representing only the very best keynote and motivational speakers.

Our team of seasoned speaking agents and event managers approach every event with one goal: find the perfect speaker, execute flawlessly, and make our clients shine on the day of their big event. 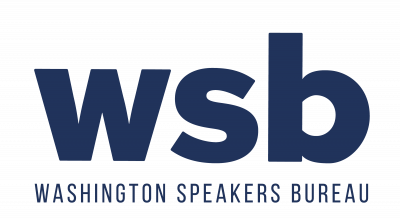