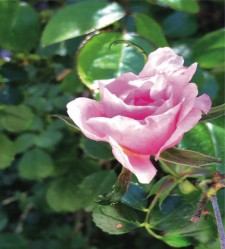 Julian, CA, April 20, 2017 (Newswire.com) - Julian, California is a historic gold mining town nestled in the mountains above San Diego, world-renowned for its delicious apple pie. But, this time of year, Julian has even more to offer than its quaint ambiance and delicious fare. It’s spring, and Julian is in bloom.

Like the rest of Southern California, Julian has benefited from this year’s exceptional rainfall and the village is awash in an unusually beautiful wildflower display.

"Anytime is a good time to visit Julian. But, with all our wildflowers in bloom, there is no time better than right now to come spend the weekend, be surrounded by our natural beauty, and take advantage of everything Julian has to offer."

Often the first to announce Julian’s wildflower season are the daffodils. Popping up along the roadsides and in open fields throughout the township, Julian’s daffodils can be attributed to Sally Snipes, a local resident of Julian who, in 1990, began planting daffodil bulbs in honor of her father, Jack. Her gesture attracted the attention of other locals who joined her in planting daffodils all over Julian’s rural countryside, resulting in more than three million daffodils bringing “gold” back to Julian every year.

Daffodils are just the beginning of Julian’s wildflower display. Julian is also wrapped in both the fragrance and the color of lilac. The hillsides, valleys and orchards are resplendent in clusters of these light purple flowers made all the more dramatic against the plants’ rich green heart-shaped leaves. The delicate lily-of-the-valley is also a welcomed guest to the Julian wildflower season. Their tall, lanky shoots covered with white, bell-shaped blossoms are, for many, the definition of spring.

Julian’s wildflower display includes red bush monkey flowers, goldenrod, California wild rose, peonies, and any number of the nearly 900 flowering plants native to Julian and its surrounding geography. A celebration of all this beauty is scheduled for May 10-13th when the Julian Woman’s Club sponsors its 90th Julian Wildflower Show at the Julian Town Hall from 10 a.m. to 4 p.m. daily. The show is free to the public.

Visit the event website at www.julianwomansclub.org/event/julianwildflower-
show or the Julian Chamber of Commerce website at www.visitjulian.com for information about the show as well as lodging, shopping, entertainment and culinary suggestions for a fun-filled weekend in Julian!

Stomp the Grapes. Drink the Wine.
22nd Annual Julian Grape Stomp Festa Is Not To Be Missed
JULIAN CHAMBER OF COMMERCE - Aug 14, 2018

The Nose Knows the Way to Sip in Julian
Julian's annual "Sip of Julian" proves that Julian is not just about apples!
JULIAN CHAMBER OF COMMERCE - Jul 10, 2018