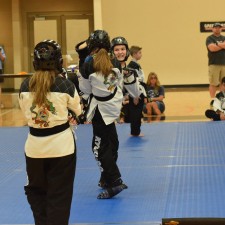 BLACK RIVER FALLS, Wis., August 28, 2019 (Newswire.com) - It’s only fitting that the 2019 American Kyuki-Do Federation hosted its largest ever northern tournament on Saturday, Aug. 17 as it celebrates the Federation’s 40th anniversary. The 167 competitors at this year’s Summer Tournament of Champions, sponsored by Greatmats, was a 15 percent increase over 2018. And it managed to accomplish the feat without the traditionally steady presence of competitors from its Lexington, Kentucky contingent.

In unusual fashion the tournament featured competitors ages 6 to 67 years old exclusively from Wisconsin and Illinois -- due in large part to the addition of a tournament Oct. 5 in Athens, Georgia.

Claiming the 2019 Black Belt Grand Championship in the age 18 and over division was Chris Pantaleo of Janesville, Wisconsin. Pantaleo also earned the honor in 2018.

The age 17 and under black belt grand champion was Cole Fechter, who trains out of Delavan, Wisconsin.

Federation members were eligible to compete in open hand forms, weapons forms, board breaking, point sparring and novice grappling at the tournament - depending on age and experience level.