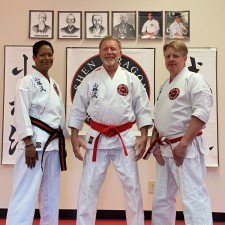 ST. THOMAS, U.S. Virgin Islands, July 18, 2019 (Newswire.com) - A staple of the martial arts community for the past 46 years, Grandmaster Jerry Otto has built a legacy of excellence and compassion at his school Shen Dragon Karate Dojo. And now he's doing it over "Greatmats."

Otto founded the school in 1981 in Phillipsburg, New Jersey, and became a six-time national champion in the Professional Karate League and North American Sport Karate Association (NASKA) in the late 1980s.

He moved the school to St. Croix, U.S. Virgin Islands, in the early 1990s where it remained for about 10 years.

After traveling the world, Otto returned to the U.S. Virgin Islands and reopened the school with his wife, Celine, and son, Bryan, in St. Thomas, where he continues to train, teach and compete. Otto earned two third-place Grand Master Division trophies at NASKA’s US Capitol Classics/China Open in Washington DC just after his 68th birthday in 2018 - his first time competing in more than 25 years. And Shen Dragon Karate Dojo was named the 2019 American Martial Arts Alliance (AMAA) Martial Arts School of the Year.

The Importance of Quality Karate Mats

While competing at his latest NASKA tournament, Otto took notice of the matted surface - and so did his students.

When in stances for his forms, Otto felt his heel give way to the pressure in the soft mats, forcing his brain to adjust his balance. His students felt the same way after working out on stable hardwood floors.

After contacting Greatmats and speaking at length with Pam about the differences between taekwondo mats and karate mats, he opted for the firmer 1-inch thick karate mats and used Greatmats online floor plan designer to design his floor.

“I went through the color schemes, printed it out and showed my wife and my son,” Otto said. “We had the discussion.”

After installing the karate floor and getting a chance to try it out, he said, “I’m so happy with it. It’s easier on the elbows and the knees, and it’s hard enough that it doesn’t give when you stand on it - unless you exert pressure.”

To help keep things realistic for out-of-the-dojo situations, he does allow students to wear flat-soled sneakers on the mats which have held up well to the shoes.

In the first three months at the St. Thomas location, Shen Dragon Karate Dojo increased its student base from 20 to more than 100 students causing the need for expansion.

When Shen Dragon doubled its space by taking over the adjoining studio, Otto said expanding the matted area was as simple as adding the new Greatmats karate mats to the existing mats.

“I took the new one and just slapped it into the puzzle and ran it to the next wall,” he said. “It just ran beautifully. It was seamless.”

In addition to the feel and performance of the mats, Otto, his students and visitors have also been impressed by the look of the flooring.

“The karate mat is appealing to the look,” he said. “People walk into my dojo, and they’ve never seen anything like it in the Virgin Islands, or in St. Thomas, and they just drop their jaw. The colors we chose - red and black - follow school colors. They’re phenomenal.”

“The karate mats are one of the more superior products on the market compared to every other surface that I’ve worked on,” he added, noting that he feels the professional look of the mats in the dojo also contributed to Shen Dragon receiving its award from the AMAA.

As for the rest of his Greatmats experience, Otto said, “The website was just so user-friendly. And customer service - I can’t say enough about how Pam treated me. We traded emails in a timely manner and she was always attentive to me. Living on an island, no one pays attention to you… This is refreshing.” 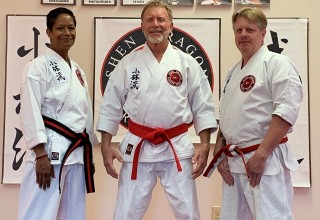 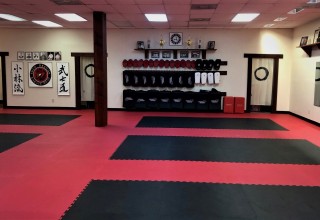