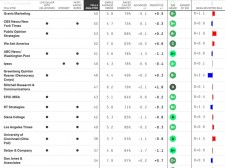 Winter Springs, Florida, June 6, 2016 (Newswire.com) - The past two years has been extremely hard on political pollsters across the United States. With many of the established polling firms showing less than stellar results since 2014, Winter Springs, Fla.’s Gravis Marketing’s ratings are rising; thanks in part to a published report by noted political polling expert Nate Silver and his 538 Pollster Ratings for all US based polling firms.

The quickly expanding non-partisan marketing research company received a grade of “B-“, an improvement from Silver’s last review in 2014 when he awarded Gravis Marketing a “C” grade. Silver’s glowing review of Gravis Marketing, plus the A- grade the firm received from Political Pundit Daily at the end of 2015 is proving that the ‘new guy on the block’ is quickly becoming a credible source of accurate polling data.

Nate Silver’s FiveThirtyEight’s pollster ratings have arguably been the Gold Standard on which all polling firms are independently reviewed and ranked since 1998. Their grading system and rankings are calculated by analyzing the historical accuracy and the methodology of each firm’s polls. Accuracy scores account for the type of election, a poll’s sample size, the performance of other polls surveying the same race and other factors.

The 538 review also calculates measures of statistical bias in the polls. Silver’s review of Gravis Marketing included analyzing 55 previous polls in the past two years, discovering that they accurately predicted results 79 percent of the time; placing them in the upper tier of more than 300 independent polling organizations.

Gravis Marketing is a relative newcomer to the highly competitive political polling world. Since its launch in 2010, the firm led by Doug Kaplan has rapidly made a positive impact in the world of collecting accurate polling data for small, local political campaigns to large-scale, nationwide campaigns for major political parties. Although the recent Silver and Political Pundit Daily reviews have highlighted the growth and improvement of Gravis’ polling results, founder Doug Kaplan remains incredibly proud of the team at Gravis Marketing that has exceeded his own expectations.

“To say that we’re incredibly honored to be placed among the top tier of polling firms in the United States by Nate Silver the 538 blog would be the understatement of the century,” Kaplan noted. “When we launched our firm in 2010, our goal was to continually improve our polling methodology and technology we use to collect accurate data. When I think about some of the incredible companies that we have eclipsed not only with Silver’s review but the Political Pundit Daily scorecard last year, it really provides confidence that what we’re doing is working.”

Although the firm showed incredible improvement from 2012 to the mid-term elections in 2014, Kaplan was resolved to continue to expand and fine-tune their polling methodology coming into the 2016 Presidential election. He noticed a growing trend that other polling firms and most political parties don’t want to admit – the electorate is vastly changing. It is Gravis’ dedication to not remaining complacent and their flexibility to fine-tune their polling collection process that Kaplan believes is what separates his firm from most of the competition.

“We’re very happy with the recent rankings; but we know we can improve – and must if we wish to compete,” Kaplan concluded. “I’ve tried to build a polling team that is separate from our political consulting firm so that we can focus on providing exceptional and focused services to our clients ranging from people running for local school boards or county commission to US Congress and Senatorial seats. We’ve come a long way in a short time, and I’m incredibly excited about our future.”

Gravis Marketing is one of the leading political consulting and polling firms in the USA. Gravis clients include political campaigns, public affairs organizations, consultants, and nonprofit organizations across the globe.

Gravis Marketing Virginia Election Poll Results: Clinton and Trump...
The focus of the Gravis Marketing poll then shifted to asking registered voters, "If you had to vote today in a match-up between Hillary Clinton and Donald Trump, who would you vote for?" The Virginians polled answered by supporting Hillary Clinton (45 percent) to Donald Trump's (41 percent). 14 percent of those polled are currently unsure as to which of the two presumptive candidates for President of the United States they'd select come November 2016.
Gravis Marketing - Jun 1, 2016
Newswire