Ash from SAVE (Stop Animal ViolencE) Foundation noted that tourists from around the world have witnessed aggressive strikes, overworking, and being used while injured... "Besides the egregious nature of the violence against these animals," Ash continued, "tourists are experiencing a pretty negative impression of the Grand Canyon, one of the seven world wonders, and the State of Arizona. 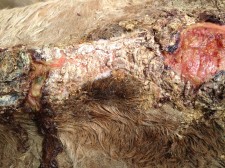 Flagstaff, AZ, April 18, 2016 (Newswire.com) - On Tuesday, April 19th at 1:30pm, a hearing will take place in the U.S. District Court for Leland Joe, a member of the Havasupai nation, now in federal custody.

After a covert operation on Thursday, federal officials arrested Havasupai resident Leland Joe for two felony and two misdemeanor counts of animal cruelty and abuse to trail horses used for packing and riding in and out of the Grand Canyon. This is the first time an arrest like this has occurred on tribal land.

His arrest came days after an animal protection group, SAVE (Stop Animal ViolencE) Foundation, launched an aggressive public awareness campaign. “We expect the legal system to convey a strong message to this criminal because these animals weren’t just neglected; they were chronically abused,” according to Susan Ash, co- founder of SAVE Foundation. Ash noted that tourists from around the world have witnessed aggressive strikes, overworking, and being used while injured. One tourist posted a video of bleeding horses on the trail and another of a horse's rear end falling down under the weight of the packs. Still others have cited emaciation and withholding of water. Tourists have also reported being threatened by the abusers after seeing, photographing, or filming suffering animals. “Besides the egregious nature of the violence against these animals,” Ash continued, “tourists report being threatened and are experiencing a pretty negative impression of the Grand Canyon, one of the seven world wonders, and the State of Arizona.”

Several of the horses confiscated from Leland Joe were severely emaciated and appeared to have exposed bone, open wounds, and extreme dehydration. They are currently receiving medical attention and will slowly be rehabilitated. Ash is hopeful they will survive. The SAVE Foundation has been fighting for a boycott or total shut down of operations like this run by individuals who neglect and abuse their pack animals. Susan Ash of the SAVE Foundation will be available for comment at the federal courthouse in Flagstaff at the hearing.

About Stop Animal ViolencE (SAVE) Foundation

Stop Animal ViolencE is committed to raising public awareness of violence, abuse, and neglect against animals, improving their lives and the lives of human with whom they exist.

Stop Animal ViolencE Launches Campaign to SAVE Havasu Horses
Hundreds of horses are being neglected, some beaten and abused in the Grand Canyon. SAVE Havasu launches a campaign to boycott their use and raise public awareness to elucidate the link between animal violence and child abuse and to reduce the violence against these defenseless creatures.
Stop Animal ViolencE (SAVE) Foundation - Apr 14, 2016
Newswire