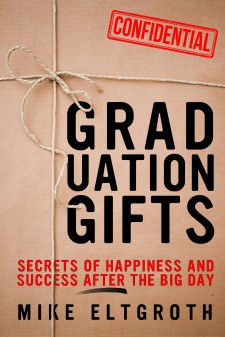 DULUTH, MN, April 25, 2017 (Newswire.com) - Data from the past several years indicate a nationwide trend that graduates and parents alike should be aware of.  The latest numbers released from the White House indicate that graduation rates for high school students are at all time record highs.  While this is great news for students and the nation in general, individual students are facing increasing competition in college admissions and the workplace.  Identifying ways to stand out and find success are critical skills often lacking in today’s graduates. BeachPath Press, LLC has just released a new book titled Graduation Gifts to solve that exact problem.

Graduation time is here again and that brings the task of selecting meaningful and useful graduation gifts for your loved one.  While graduates may have dreams of breaking from the crowd and becoming successful, many don’t have a clear picture of what that really means or how to get there. In his newly released book titled Graduation Gifts, author Mike Eltgroth explains that success is an individual concept and needs to be carefully examined before costly mistakes are potentially made.  The lack of a clear post-graduation plan along with a lack of real-world skills can often lead to anxiety and poor decision making with long term impacts. In this book, Mike outlines the probable paths through life based on several key aspects and gives practical advice on a number of topics that are critical for new graduates.

“In this age of increasing student debt, growing income disparity, and constant exposure to society’s image of success, it is vitally important for new graduates to understand what they truly want, how to go after it and what to expect along the way,” said Mike.  Throughout the book three categories of people are used to examine the probable paths through life based on three key aspects.  These aspects are (1) how they view time, (2) what they value, and (3) what they know about money and how to use it.  Along with a basic discussion of finances, many other important topics are covered such as dealing with people, learning from failure, what to expect at their first job, understanding emotional intelligence, building confidence and more.

This book was written to be an easy read that can be referenced for years to come. Graduation Gifts: Secrets Of Happiness And Success After The Big Day, written by Mike Eltgroth, is published by BeachPath Press, LLC.  An online video trailer can be found on YouTube. The book is available now through Amazon for this year’s graduation gift giving season.  Further inquires can be made to info@beachpathpress.com.

Publisher of books for self help, career growth and entertainment.

Success For Graduates Outlined In New Gift Book
Newly released book for high school and college graduates offers advice on success and life after graduation in these challenging times.
BeachPath Press, LLC - May 1, 2015