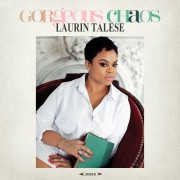 Gorgeous Chaos is Laurin Talese’s eagerly anticipated debut album which follows her EP, An Invitation, released late last year. The recording showcases the songstress’ magnificent instrument, and further expands upon her whimsical narrative which provides an alluring glimpse into her personal life experiences.

“In my early involvement with romance, there was so much ambiguity. I was eager and impatient; wistful and naive. I had everything to learn, and that first glimpse of awareness and confidence on the horizon was absolutely GORGEOUS. However, while telling my ever-evolving story, I would be remiss to exclude the chaos that ensued. That crazy back and forth dance you do when you're on the precipice of an epiphany.”

L.A. Composer Michael Baiardi to Receive ASCAP Screen Award for Top-Rated ASCAP Score of 2021 for the Real Housewives of Beverly Hills (BRAVO)
ARE GROUP, LLC - May 3, 2022