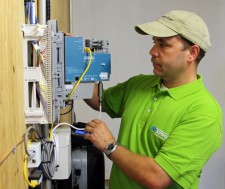 Rock Hill, SC, May 18, 2016 (Newswire.com) - ​You’ve probably seen ads and content that touts the big news. “Gigabit Internet” is coming to the Charlotte area, thanks to Google Fiber. The only problem with that announcement is that Gigabit Internet has been here in the Carolinas making internet connections super fast for quite some time. That fact may be news to Google, but it’s not news to the 30,000 homes and businesses that already have access to Zipstream Broadband, provided by the Carolinas’ own locally grown telecommunications company, Comporium.

Faster out of the gate

Comporium saw the writing on the wall years ago. To speed our area’s future as a knowledge-based economy, the Carolinas had to have ultra-fast Internet service. The company quickly became the first in the area to provide download and upload speeds of 1,000 megabits per second – or one gigabit – over its own fiber optic network. Named “Zipstream,” Comporium’s gig service was designed to support Carolina communities’ efforts to become recognized hubs for recruiting, launching and growing high-impact technology and other businesses. After announcing the advent of the new service in February 2014, Comporium launched Zipstream to businesses in downtown Rock Hill in June 2014, becoming one of only a few communities in the U.S. to offer gigabit broadband connections. By July 2014, it had begun delivering gigabit Internet service to 125 fiber-to-the-premises residential neighborhoods and more than a dozen business parks in York and Lancaster counties in the southern part of the Charlotte metropolitan area. Comporium’s “digital lifestyle” has now spread from the Midlands of South Carolina around Columbia to the greater Charlotte area and beyond in N.C.

Comporium, an experienced broadband provider to over one hundred thousand businesses and residences, offers advantages no Silicon Valley newcomers can match. Its more personal, local service comes from people who are your friends and neighbors here in the Carolinas. Yet, just as it has for decades, the company has a global view that drives its dedication to leading the way with advances in technology pioneered around the world.

The new Google Fiber website says “It’s too soon to share an exact date or plans and pricing information. A lot of things impact our timing…sometimes things can take a bit longer than we originally anticipated.” In contrast, Zipstream service has been up and running for nearly two years, which means companies and families who’ve chosen Comporium are already living the digital lifestyle, spending far less time buffering and more time speeding data transfer, video conferencing, uploading videos and playing online games.

Going forward, you can expect the Carolinas own homegrown telecommunications company to continue its long history of technological firsts. How far it can go is only limited by the imagination and support of the communities it calls home.