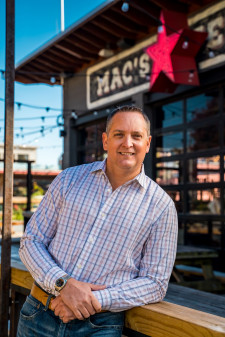 CHARLOTTE, N.C., December 9, 2021 (Newswire.com) - Mac's Hospitality Group (MHG) recently announced that Tony Salerno has been named as Vice President of Operations. Salerno brings a wealth of experience from previous positions with some of the best-known names in the restaurant industry.

Raised near Washington, D.C., Salerno began his restaurant career in 1993 as a dishwasher with TGI Fridays. Ten years later, he had risen through the ranks to lead the team as General Manager. He subsequently moved to Wilmington to open the first location of Red Robin Gourmet Burgers in North Carolina, and helped the brand expand across the state as Regional Operations Director.

In 2012, Salerno joined Bar Louie Restaurant, LLC as Director of Operations, managing bars in Missouri, Michigan, Ohio, Virginia, the Carolinas and Florida. In 2016, he joined LMR, LLC, based in Raleigh, as the Director of Beverage, and became the Brand Leader for Carolina Ale House shortly thereafter.

"The hospitality pros behind the Mac's brands make up one of the most exciting and forward-thinking teams in the Southeast," Salerno said. "I'm extremely happy to be part of their evolution and to help inspire new transitions based on industry-leading concepts, standards and my own experiences."

"Tony's career has given him great insights into a host of different restaurant markets and environments," said Shang Skipper, President of MHG. "We are so fortunate to have the benefit of his industry experience as we strive to make our high-octane brand even more of a leader in innovation and generational appeal."

Mac's Speed Shop has blended BBQ, beer and bikes to create a truly unique experience. Mac's takes BBQ very seriously, as demonstrated when they took first place for their house-made barbecue sauce and second place in the Whole Hog competition at the Memphis in May World Championship Barbecue Cooking Contest. In addition to first place regional awards across the Southeast, they hold the Reserve Champion Whole Hog award for the Beer, Bourbon & BBQ Festival. Everything is made from scratch daily in Mac's kitchen, including their BBQ sauces and dressings. Known for its live music and events, Mac's welcomes dogs to its patios so you can bring the whole family. Mac's also has daily drink specials, including local craft beer, wine and an extensive liquor menu specializing in bourbon and scotch whisky. They have used their culinary talents to elevate comfort-food favorites, like mac 'n' cheese and brisket chili. With a selection of more than 300 different beers, everyone (white collar, blue collar or no collar) is welcome at Mac's.

Mac's Turns Off Its Smokers to Fight Burnout
The Jewell Agency - Aug 3, 2021

Mac's Rolls Out People Perks and Signing Bonuses With Employee Incentive Program
The Jewell Agency - May 11, 2021