Gigastone reveals its first ever iPhone Flash Drive that is Apple MFi approved and can be used with any existing Micro SD Card memory. 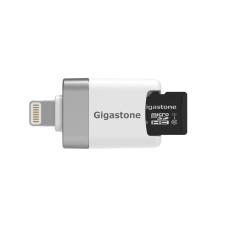 Apple iPhone users running out of memory are compelled to upgrade their phones to get additional memory. Gigastone once again has liberated iPhone users by delivering their state-of-the-art iPhone flash drives. Traditionally Apple MFi approved iFlashDrives have only had internal memory, with an Apple Lightning adapter on one side and a standard USB adapter on the other. This Gigastone first ever i-FlashDrive CR8600, has an Apple Lightning adapter and a standard Micro SD Card can easily slide into this, world smallest, MFi approved iPhone Flash Drive. ​

The company explained that one big advantage was, data residing on a Micro SD Card can easily be accessed from an iPhone or iPad without having to copy the data onto the iPhone. Photos, Videos and Music files, usually too large to store on an iDevice, can easily be viewed or accessed, using the Gigastone CR8600 iPhone Flash Drive Micro SD Card Reader. There is no necessity to copy the data onto the iDevice.

Harold Katz, Gigastone Chief marketing Officer, expounded by explaining, “This phenomenal device not only allows a user to view large multimedia files on their iPhone’s without using up iPhone memory, it can also be used to backup iPhone data.” He went on top say, “The complimentary Gigastone Software bundled with the device can be used to ensure that the iPhone is always backed up as well.”

Gigastone is the leading global mobile accessory brand, specializing in state-of-the-art, high-end mobile peripherals and technology. For two decades, Gigastone has been distributing technology to all the major big-box and Electronic Commerce stores. Gigastone has leveraged its engineering, manufacturing and quality control skills to drive world-class production and deliver quality products. A uniquely positioned company, poised to continue to grow and maintain its leadership in the fast paced consumer electronics space.

Gigastone is the Leading Global Mobile Accessory Brand specializing in state-of-the-art, high-end mobile peripherals and technology. For close to two decades, Gigastone has been distributing memory and technology to all the major big-box stores.