Bitkom expects a total turnover of 160 billion Euro in 2016 for the software, hardware and services market. The lack of professional employees remains a considerable problem of the industry. bloodsugarmagic offers its services and a webcast to help foreign companies entering the market. 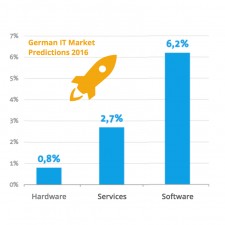 villingen-Schwenningen, Germany, April 11, 2016 (Newswire.com) - Based on a recent prognosis by German high-tech association Bitkom, the annual turnover of the German IT market for the first time ever is expected to break the 160 billion Euro limit in 2016. According to the prognosis, the industry as a whole will grow by 1.7 percent, with software sales being the strongest driver with more than 6 percent.

The software segment is expected to grow in 2016 with a plus of 6.2 percent to 21.5 billion Euros. IT services will climb by 2.7 percent to 38.2 billion Euro while sales with hardware according to Bitkom will rise only slightly by 0.8 percent to 23.8 billion Euro. In general, the branch information technology will generate 83.5 billion Euro – a plus of 3 percent. “The software houses profit from the trend that the whole economy is moving towards digital business models”, says Thorsten Dirks, president of Bitkom.

"Germany remains a strong growing and very exciting IT market. Especially the combination of a growing market and a massive lack of IT experts creates the perfect opportunity for foreign companies for cooperation and entering this new, promising market."

Bitkom states that the general ITC market, which besides information technology also consists of telecommunication and consumer electronics, has grown much stronger in the past year than originally expected. Instead of the estimated plus of 1.9 percent, sales have risen by 2.8 percent in 2015 to 157.4 billion Euro. The reason for that lies in the smartphone boom of the second half of the year: the turnover with the devices has grown by 22.1 percent to 10.3 billion Euro. That is almost three times as much as originally expected.

The good situation on the market also leads to the creation of more jobs. Bitkom estimates that there will be about 20,000 more jobs by the end of 2016. “With 1.022 billion employees the Bitkom branch establishes its position as second biggest industrial employer, just behind mechanical engineering but considerably ahead of other leading industries such as automotive or the chemical industry”, says Dirks.

On the other hand, the industry is still having problems filling all those vacancies. According to Bitkom, there are still 43,000 open and hard to fill vacancies for IT experts. Dirks therefore warns: “Without the immigration of foreign specialists, without foreign students, without the international exchange, we can’t successfully shape the digital transformation.”

“Germany remains a strong growing and very exciting IT market”, declares Bernd Hoeck, founder of bloodsugarmagic and go-to-market expert. “Especially the combination of a growing market and a massive lack of IT experts creates the perfect opportunity for foreign companies for cooperation and entering this new, promising market.”  bloodsugarmagic has a deep knowledge of the German IT market and a long-standing expertise in go-to-market strategies. We gladly advise foreign companies that are willing to take the step to a new market and invite you to our complementary webcast “Entering the German IT Market”:
https://attendee.gotowebinar.com/rt/740064057925773570

bloodsugarmagic is an international network of experts in positioning, marketing programs and go-to-market strategies for IT companies.

Bloodsugarmagic Advices DocuLynx on Their Positioning and Product Roadmap Development
The Denver (CO) based software company, specialized in document and information management, engaged the positioning experts from Germany for the second time already. Deep understanding of the software business and great workshop methods for market positioning and roadmap definition made bloodsugarmagic a perfect fit.
bloodsugarmagic GmbH & Co. KG - Feb 15, 2016