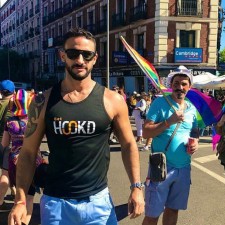 Speaking about their partnership with Hookd, Eliad Cohen, the Israeli model, founder of Papa Parties, and international gay personality noted, "I love the concept behind Hookd and I think that it’s exactly what the gay community has been longing for. Hookd offers a cool, fresh and authentic approach, which fits perfectly with Papa."

I love the concept behind Hookd and I think that it's exactly what the gay community has been longing for.

Eliad Cohen is an Israeli producer, actor, model and entrepreneur that became a prominent gay icon after being chosen as the cover model of the Spartacus International Gay Guide for the 2011­-2012 issue. Since then he has grown in international popularity with over one million followers on social media. Earlier this year, Eliad was one of the front-runners to win the latest season of "Survivor: Spain," before he was forced to drop out of the competition due to an injury after competing in an underwater challenge.

Eliad is also the founder and face of PAPA PARTY, one of the most well respected gay party brands in the world with exceptional performances, top international DJs, and an incredible energy which have made PAPA famous globally. PAPA WORLD TOUR includes major cities and gay meccas around the globe such as Madrid, London, Tel Aviv, Sao Paulo, Houston and more.

Hookd, the recently launched gay dating app crossed the 100,000 downloads threshold, with a disruptive new app-dating format, setting the three pillars of authentic, relevant and safe at its core.  In contrast to existing dating apps and services, Hookd does not offer users to browse through profiles but rather provides a real-time feed, where guys publish to their local area in real-time what it is they are looking for with something similar to a Tweet and can only use an in-app selfie as their profile photo. Users in the area can see their post in real time and if interests align, connect by sending private messages and verified in-app photos.

“We’re excited to have Eliad on board with us as we see him and his brand as natural partners," noted Daniel Joseph, Hookd founder & CEO. "Both our brands are perfectly in sync with the globalization of gay culture and both offering a genuine, safe, fun place for men to meet.”

The next Hookd-powered Papa Party is "Tel Aviv Beach Party," at The Coronet Theatre, London. Friday, 08 Sept. 2017 as part of the TLV in LDN festival.

Hookd is available for Android and iOS in the app stores or via gotHookd.com.

Hookd: A New Gay Dating App Offers a Real Time Experience and Promises to Ensure Privacy and Security.
Unlike other dating apps, Hookd functions on a real-time request rather than on a profile basis, saves time and results in better matches.
Hookd - Aug 29, 2017