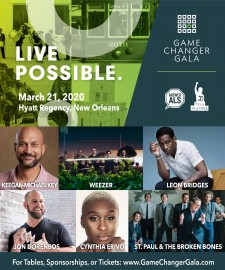 NEW ORLEANS, March 2, 2020 (Newswire.com) - The Game Changer Gala and its Co-Chairs, Gayle Benson and Drew Brees, are excited to announce the lineup for the 2020 event in New Orleans on March 21. The Game Changer Gala helps raise critical funds for ALS research and patient empowerment, supporting both Team Gleason and Answer ALS. Team Gleason strives to provide solutions for those living with ALS now and Answer ALS is the single largest coordinated and collaborative effort to end ALS in the history of the disease.

Emmy and Peabody Award-winning writer, actor, and producer Keegan-Michael Key will Emcee with Grammy award-winning artists Weezer, Leon Bridges, and Cynthia Erivo. Illusionist and finalist on America’s Got Talent Jon Dorenbos will perform, as well as the incredible St. Paul and the Broken Bones. There will be other surprises, but the lineup is one not to miss!

“I am a fan of every person and group who agreed to join us at the Gala,” said the founder of both organizations, Steve Gleason. “That some of the biggest names in entertainment chose to come together for this cause is just extraordinary,” Gleason continued. “While the goal of the event is to help us further solutions to ALS, it was important to Michel and me that this event also be a celebration of the possible.”

In an effort to amplify the messages of what both organizations have accomplished through their collaborative drive, the event will also highlight game-changing moments in history as well as those who seek solutions to ALS. Not only will the visual elements help weave the story of people coming together to solve the world’s most challenging problems, but the event also brings artists to the event who represent that ethos.

Keegan-Michael Key is one of Hollywood’s most in-demand forces. Cynthia Erivo was nominated for an Academy Award for her role in the film, "Harriett", and its anthem, "Stand Up". She is also a Grammy and Tony Award winner. Both Weezer and Leon Bridges have defined their own lanes of music with Grammys and career accolades. Jon Dorenbos is an ex-NFL player who was near death in 2017 but turned tragedy into magic. And Rolling Stones Magazine named St. Paul and the Broken Bones the “best soul revivalists.”

As one of the key elements of the event, there will be a celebration of a few of many game-changers who have helped make significant changes in the lives of those with ALS and beyond. Game-changers for this year’s event are: Pete Frates (posthumously), co-creator of the Ice Bucket Challenge, Gayle Benson, owner of the New Orleans Saints and Pelicans, Dr. Jeffrey Rothstein, Director of the Brain Science Center at Johns Hopkins, Jenny Lay-Flurrie, Chief Accessibility Officer at Microsoft, Lois Backon, Head of Corporate Partner Marketing/JP Morgan Chase, and Lori Beer, Global Chief Information Officer/JP Morgan Chase.

“I’m honored to be included in such a prestigious group and for this amazing event,” said Dr. Jeff Rothstein. “I’ve been working toward an end to ALS for over 25 years, and there has never been a time when more progress has been made in such a short amount of time. I’m deeply grateful for the support and awareness created by this recognition and event.”

About the Game Changer Gala: The Game Changer Gala was created to highlight the efforts of two extraordinary organizations in the battle against ALS, Team Gleason and Answer ALS. Founded by Steve Gleason, former NFL icon diagnosed with ALS in 2011, both organizations have helped shift the paradigm of not only living with ALS but created the largest research effort in the world to end the disease. We will also be celebrating the Founder of both organizations, Steve Gleason, being awarded the Congressional Gold Medal while living with ALS for 10 years. 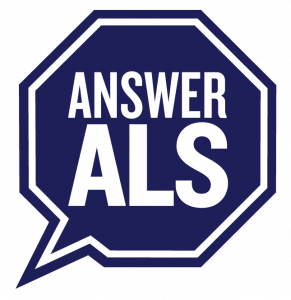 Answer ALS is Proud to Announce the Release of New In-Depth Biological and Clinical Datasets to Aid ALS Research
A new set of rich Answer ALS project data is now available through the Answer ALS Data Portal
Answer ALS - May 13, 2020

WSU and UW Alums Launch ALS Apple Cup Challenge in Support of Team Gleason and People Living With ALS
WSU alum Steve Gleason and UW alum Phil Green challenge each other and their alma maters to raise the most funds in the first annual event
Answer ALS - Nov 6, 2019
Newswire