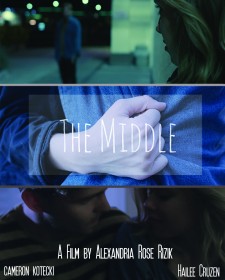 SCOTTSDALE, Ariz., April 11, 2018 (Newswire.com) - Imagine going from rejection to Cannes Film Festival... that’s exactly what happened to Arizona writer/director, Alexandria Rizik. Alexandria had pitched a screenplay to a major production company — that was potentially going to option it out. Plans fell through and Alexandria decided to take matters into her own hands.

“I didn’t have the budget for a full-length feature film,” Alexandria said. “But I did have the means to shoot a shorter version of it.” Alexandria went on to shorten the script and from there teamed up with a Millennial-based crew and cast that took a small budget flick and helped turn it into a festival fave!

Although this short was completed in just February of this year, “The Middle”, has already been accepted to Cannes Film Festival’s Short Film Corner and other popular festivals! The story follows a victim of rape who begins working at an intimate retailer where she runs into an old high school classmate who helps her to face intimacy issues through using drugs — and what a time to be raising awareness about rape with all of the prolific movements such as “Me Too” and “Time’s Up” taking over the media.

Alexandria teamed up with Fascinations, “a leading retailer of sensual products, apparel, and wellness education”, to bring this story to life. She even added that “it’s funny, some of the inspiration for this story came from hanging out in Fascinations and seeing the people who shop there, hearing people’s stories…it contributed to the research of this ‘world’ that the main character, Alouette, has entered.”

The strong message seems to be already capturing the attention of festival judges and even helped Alexandria to launch her own production company … Princess Rose Productions.

Princess Rose Productions was made with the sole purpose to help other creatives get their work made and marketed!

Alexandria says, “Princess Rose Productions is for anyone and everyone! Whether you’re a writer who needs help filming your own film or you just have an idea. We work with everyone’s budget to create magic.”

So, what’s next for this budding filmmaker? She is planning on filming another short film in the fall titled, “Synchronicity”, followed by her first feature film next year.

Make sure to stay posted about what is coming up for Alexandria by following her on AlexandriaRoseRizik.com or PrincessRoseProductions.com — and be sure to keep your eyes open for her film, “The Middle”! With how it is succeeding in the festivals, it might just be at a film festival near you.

New Children's Book on Diversity is Just What the Doctor Ordered
A writer's mission to open society's eyes on bullying through a cow who makes chocolate milk!
Princess Rose Productions - Sep 20, 2017
Newswire