From BENNETT'S SONG to BETRAYED, Harley Wallen is a Filmmaker of Dynamic Range 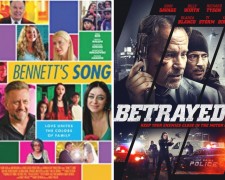 LOS ANGELES, January 15, 2019 (Newswire.com) - ​​​​​​​​​​​​Harley Wallen is an actor, writer, and director with an enduring passion for bringing stories to the screen. 2018 has brought no less than three of his films to the VOD scene. His persistence has paid off, giving him the opportunity to direct screen legends such as Tom Sizemore (SAVING PRIVATE RYAN, HEAT) John Savage (THE DEER HUNTER, THE THIN RED LINE), and cult figures such as Tara Reid (AMERICAN PIE), Richard Tyson (KINDERGARTEN COP) and Dennis Haskins (SAVED BY THE BELL).

Wallen is the director and star of BENNETT’S SONG, a family dramedy about a widower with seven adopted kids who meet a divorced dentist who also has seven adopted kids. Together, this large family adjusts to their new life and learn to accept the challenges that come with it. BENNETT’S SONG was written and co-executive produced by Wallen’s business partner, Nancy Oeswein and was acquired by acquisitions executive Sharry Flaherty of Samera Entertainment and released on DVD and VOD by Vision Films on Aug. 14, 2018. Due to its overwhelming success and great word of mouth, a sequel is already shooting! Also, you can stream BENNETT’S SONG right now with an Amazon Prime subscription.

Not to be outdone, Flaherty also acquired Wallen’s follow up, the darker toned BETRAYED starring John Savage as a Detroit mayor whose daughter is sent into human trafficking by a drug cartel after they push the Russian mafia out of town.

BETRAYED was written by Wallen, who also co-stars alongside T.J. Storm, Richard Tyson, and Billy Wirth. BETRAYED was released on DVD and VOD by Vision Films on Oct. 2, 2018. It is also available to stream via Amazon Prime. So definitely take the time to check it out.

Founded in 1997 and based in Marina Del Rey, CA, Vision Films is an independent worldwide Distributor of Feature Films, Documentary Specials, Series, Music, and Reality Programming. They license all available rights from Theatrical, DVD/Blu-Ray, Television and VOD/Digital Media rights to both the International and Domestic marketplaces. Vision currently handles a library of over 500 Feature Films, 500 Documentaries and 100 different Music Programs from some of the most prolific independent film producers in the world. They develop a special marketing plan and work closely with Producers on a strategy to license their film(s) to the right Distributors around the world.

Sharry Flaherty CEO and Founder of Samera Entertainment is a seasoned film producer and acquisitions agent. While she has carved a great reputation in the horror and thriller genres, Sharry has proven she can easily handle a plethora of titles and special interests including drama, Sci-fi and faith-based films. Her resume is filled with a decade of experience in the industry and she has been instrumental in the production and distribution of a number of films. Currently, she is an Acquisitions Executive for Vision Films acquiring films that are either completed or in post-production for their domestic output deal with Sony, or for the foreign market, or worldwide. Sharry’s tremendous work ethic and a vast network of film professionals are due largely to her exceptional reputation among industry types.