Stutte Appointed Director of Research and Development for Eden 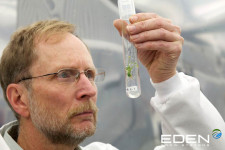 HOUSTON, October 20, 2021 (Newswire.com) - Eden Grow Systems announced today the appointment of Dr. Gary Stutte as Director of Research and Development. In this role, Dr. Stutte will direct and coordinate plant research carried out by the company and its academic partners.

For 25 years, Dr. Stutte managed NASA's flight and ground-based plant research at the Kennedy Space Center in Florida, where he researched and developed safe, sustainable food production systems for long-duration space missions to the Moon, Mars, and beyond and served as Principal Investigator on four space flight experiments. He has published over 150 scientific articles on the effects of growing conditions on crops grown in closed environments. His work has covered research into LED lighting, plant nutrition, space biology, and controlled environment agriculture. He has received numerous honors and awards, including NASA's Space Flight Awareness Award, The American Society of Horticultural Science's Outstanding Industry Horticulturist, and the Foundation for Development of Controlled Environment Agriculture's Master of Innovation Award. He is a founding member and served for nine years as Executive Director of the American Council for Medicinally Active Plants.

"The addition of Dr. Stutte at this juncture, along with our academic partners at Texas A&M and North Dakota School of Agriculture, will allow Eden to continue to push forward at the forefront of grow technology at a time when it is most desperately needed," stated L. Barton Womack, CEO of Eden Grow Systems.

Dr. Stutte's research will be focused on further refining and optimizing the NASA-derived grow technology that is the basis for Eden's Grow Tower. By developing specific grow profiles for an ever-expanding range of food and high-value crops, Eden hopes to empower growers everywhere.

According to Dr. Stutte, "I've been engaged with development of controlled environment cultivation technology for decades and am excited to see the technology being embraced. People are looking for solutions that provide a safe and reliable source of food. Eden's Grow Tower fills a void in this emerging market by packaging the NASA-based research into a professional-grade plant growth system that is accessible to the homeowner."

Released this year, the Eden Grow Tower is the only commercially available system that can grow a complete range of crops including root vegetables (potatoes, carrots, onions, beets) as well as all fruiting vegetables, herbs, leafy greens, and medicinal plants.

Eden Grow Systems is Feeding the Future™ by creating next-generation modular farming and survival systems. The company adapts NASA technology, bringing cutting-edge science down from space and into your home, making it possible for every family to become completely independent. The company's first product, the Eden Grow Tower, is small enough to fit in a kitchen pantry, grows a wide variety of crops as well as fish for protein, and is now available for pre-order. The company is based in Houston, Texas. https://edengrowsystems.com

Eden Grow Systems is feeding the future by creating next-generation modular farming and survival systems. The company, based in Houston, Texas, adapts NASA technology and brings cutting-edge science down from space and into your home.

Eden Launches The Hippocrates Initiative
'Let food be thy medicine, and medicine be thy food'
Eden Grow Systems Inc. - Mar 8, 2022