'Railroad Rivals', the most recent brain-child of Glenn Drover, appears today on Kickstarter. 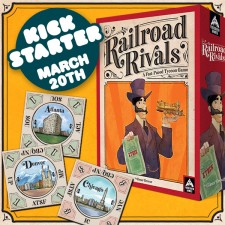 PLAINFIELD, Ill., March 20, 2018 (Newswire.com) - “If 'Railroad Tycoon' and 'Carcassonne' had a baby, it might look something like 'Railroad Rivals,'” said Lance Myxter, a board game reviewer known as ‘The Undead Viking’ who had early access to the design.

“'Railroad Rivals' is a fast-play, tile drafting and laying game where all players build a railroad empire that stretches across America… and across your table,” explained Glenn Drover, the designer, and co-founder at Forbidden Games.

Drover went on to say that, “While playing 'Railroad Rivals,' cities are connected via the twelve great railroads that stretched across America, while simultaneously building each player's stock portfolio. Players will use those railroads to make deliveries, resulting in driving up the price of stocks. At the end of the game, the player that has run the most profitable railroad while also owning the most valuable stocks will become the greatest of all of the 'Railroad Rivals!'”

The stunning artwork in the game was created by a team of artists and designers that included Mark Page and Brian Kesinger, two Disney artists.

'Railroad Rivals' will launch on Kickstarter on March 20!

Forbidden Games is a new board game company founded by two veteran game designers and entrepreneurs: Jason Kapalka, a co-founder and chief game designer at PopCap, makers of video games such as 'Bejeweled,' 'Peggle' and 'Plants vs Zombies,' and Glenn Drover, the founder of Eagle Games and designer of numerous board games including the tabletop versions of 'Railroad Tycoon' and 'Age of Empires III.'

Forbidden Games, Inc. is an Illinois-based board game developer and publisher.

Forbidden Games is a new board game company founded by two veteran game designers and entrepreneurs: Jason Kapalka, a co-founder and chief game designer at PopCap, and Glenn Drover, founder of Eagle Games.