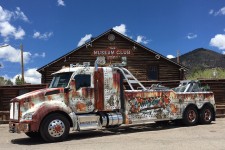 "This truck is a cross between our beloved Disney character Tow Mater and an old Route 66 rat rod," he said.

The heavy-duty truck sports fly splat and trailing smoke, among other details that give the 2017 Kenworth T880 with a Century 5130 towing unit character and a unique look.

Johnson says he built his first heavy-duty tow truck – a Holmes 750 – about 42 years ago as a 19-year-old entrepreneur. The company is a family-owned and -operated business since 1979.

Johnson's Heavy Towing participated in the 28th annual Shine 'n Star Tow Truck Photo Beauty Contest, and its truck was one of more than 500 entries from around the country and Canada competing in categories ranging from light duty, medium duty, heavy duty, car carrier and working trucks.

The Grand Prize winner gets $1,000 cash prize and a cover on Tow Times magazine. Five first-place winners receive $500 each and a future Tow Times cover. Second place winners earn $300 each, while third place receive $200 each.

Here are the first-place winners in their respective categories:

To see all the 2019 Shine 'n Star winners, visit shinenstar.com.