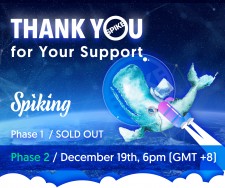 GEORGE TOWN, Cayman Islands, December 14, 2018 (Newswire.com) - Spiking announces that it has sold out the first public tranche of its Initial Token Offering. The public sale was fully subscribed three hours after it opened. On 12 December 2018, a total of 24 million SPIKE tokens were set apart for registered users of the Spiking app in Phase 1. The company raised US$30 million in its private sale in October.

Spiking is the world’s first blockchain asset validation and Artificial Intelligence-driven crypto trading infrastructure. Through its platform, users can automatically follow the trades of ‘whales’ who meet their goals, with ‘whales’ defined as traders who hold large amounts of cryptocurrency.

This follows the successful launch of Singapore’s first stock tracking app that enables retail investors to follow the trades of key shareholders of public companies listed in six stock exchanges.

The second and third phase will start on 19 and 26 December, respectively – timeline and incentives:

"Spiking sold out the SPIKE tokens in Phase 1 on its website https://spiking.io and on Kryptono Exchange's XPAD platform in three hours. We thank all our supporters for this milestone," says Clemen Chiang, Ph.D., CEO of Spiking.

The Spiking Initial Token Offering is ranked amongst the world's top 3.3% of ICOs. It is rated 4.4 on ICObench and 4.8 on ICOholder respectively, out of a maximum score of 5. Both are leading ICO rating websites.

For details of the Spiking ITO, please refer to https://spiking.io

The Spiking blockchain platform allows traders to find Whales (i.e. key executives behind cryptocurrency tokens, mining pools and/or large holders) and follow their cryptocurrency trades[1]. Powered by state-of-the-art tools where followers meet Whales in a completely transparent environment, it will be built on a modern technology stack with fully audited security standards. The Spiking platform intends to do this by using smart contracts on the blockchain, allowing users to mirror the trading activity of any Whale and control their own segregated trading accounts directly.

[1] Subject to relevant laws, regulations and licenses, where necessary.

The Spiking Platform will help traders to follow whales in the cryptocurrency market.

Spiking Announces Listing of SPIKE Token on Kryptono Exchange, Bringing New Liquidity to Token Following Successful ITO
The high volume exchange's listing brings a new liquidity to the SPIKE token, giving cryptocurrency investors who missed the sold-out Initial Token Offering (ITO) a fresh opportunity to buy - and to trade with the power and knowledge of 1,000 cryptocurrency whales informing them. The Spiking app, which powers the FinTech ecosystem, already boasts 180,000 active users and growing, thanks to its use of Artificial Intelligence (AI) and big data. The company also announced plans for its own exchange, scheduled to launch in Q4 2019.
Spiking Limited - Apr 1, 2019