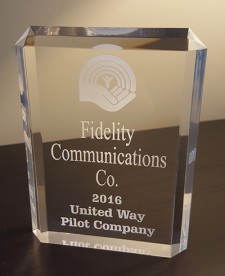 Sullivan, MO, September 9, 2016 (Newswire.com) - Fidelity Communications has been named a pilot company for the 2016 Franklin County Area United Way fundraising campaign by the county United Way’s board of directors.

As part of the campaign, Fidelity launched an effort to raise of minimum of $500 in employee contributions and match that amount with a corporate donation. But employees came through with $2,358 in donations. A $500 employer match brought the grand total to $2,858.

FCAUW provides funding for programs that strengthen families, nurture and protect children and youth, assist the elderly and disabled, and provide emergency services.

“I’m excited about the opportunity we have to do even more for the community where we live and work,” said Michelle Williamson, Fidelity Benefits Manager, in kicking off the company donation effort. She noted that 83 cents of every dollar donated goes directly back to the community.

“Their overhead is very low,” she said. “The funds stay local. Now that I’m aware of what the United Way does, I see it all over town, like the Empac van providing transportation for its workers. Giving is a great way to show how much we care about our community.”