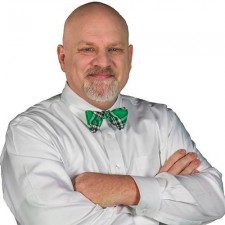 Cleveland, TN, March 20, 2017 (Newswire.com) - It is with great sadness today that Allan Jones, founder and CEO of Check Into Cash®, announces the passing of Mark Grissom, 53, the company’s national spokesman, better known as “Money Mark.”

Grissom died unexpectedly over the weekend from what was believed to be a heart attack. He leaves behind a father, Tom, and brother, Kevin.

Grissom worked at Check Into Cash for only five months but became legendary for his short videos that garnered millions of views on social media.  His most famous video was filmed at the Cleveland Regional Jetport last November after Donald Trump’s stunning election victory.

In the video, Grissom - accompanied by sidekick “Katie Cash” (Cleveland, TN, schoolteacher Katie Simpkins) – urged celebrities who had vowed to leave the country if Hillary Clinton lost the election to fly free with Jones Airways to Canada. The video became viral on Facebook and YouTube and was called an Internet sensation.

Prior to his time at Check Into Cash, Grissom owned Grissom Funeral Home in Cleveland and was the host of a popular radio show, Mark in the Morning, on WOOP 99.9 FM. He was also an avid Chicago Cubs fan who finally got to see his favorite team win the World Series in 2017.

Check Into Cash CEO Allan Jones said today, “Mark was a breath of fresh air for our company and brought us new life. He was filled with enthusiasm and excitement – and he loved this company and our team.”

“In his last conversation at headquarters, he said this was the happiest he had ever been in his life. Mark was a personal friend of mine for many years and our prayers are with his family.”