Fandor to Celebrate the History of Festival de Cannes

Fandor will feature a 'Cannes you dig it?' library on its independent streaming app in honor of the 75th Festival de Cannes 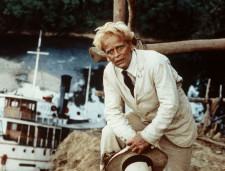 Fandor will feature a vast collection of Festival de Cannes features as part of its "Cannes you dig it?" library. Highlighted features will include works from the many decades of the festival, including titles from Werner Herzog like Fitzcarraldo (1982), for which Herzog won the Best Director award in 1982. Works from recent decades will also be featured, including Laurence Anyways (2012), winner of the Queer Palm for Xavier Dolan and Un Certain Regard - Best Actress for Suzanne Clément and Asako I & II (2018), Palme d'Or nominee for Ryûsuke Hamaguchi.

Legendary Chinese-American cinematographer James Wong Howe will be celebrated in honor of Asian American Heritage Month with a highlight on Howe classics, including the four-time Academy Award-nominated Algiers (1938), They Made Me a Criminal (1939), and Behave Yourself! (1951).

Fandor Exclusive Moon Rock for Monday (2020), will premiere on Fandor beginning May 24. Moon Rock for Monday, directed by Kurt Martin, follows the unlikely friendship of a young terminally ill girl and a fugitive teenage boy who travel to visit a moon rock that the girl believes will heal her, starring Ashlyn Louden-Gamble, George Pullar, and Aaron Jeffrey.

Fandor streams thousands of handpicked, award-winning movies from around the world. With dozens of genres that include Hollywood classics, undiscovered gems, and the latest festival favorites, Fandor provides curated entertainment and original editorial offerings on desktop, iOS, Android, Roku, YouTube TV, and Amazon Prime. With a rapidly expanding library and innovative partnerships, Fandor's goal is to captivate and inspire a global community of movie lovers. Learn more at http://www.Fandor.com.

Fandor Rocks and Rolls Into Spring With a Feature Spotlight on Rockumentaries
Fandor highlights Nick Cave, David Bowie, Bobby Keys, The Beatles, and a slew of famed rockers with an April focus on rock documentaries, Roger Corman, and Ebertfest - April 20-23
Fandor - Apr 1, 2022

Fandor Celebrates Women's History Month with a Spotlight on Artists on Both Sides of the Camera
Fandor to showcase independent films featuring women filmmakers and stars and will focus on the Indie Spirit Awards and filmmaker Lynne Sachs
Fandor - Mar 1, 2022