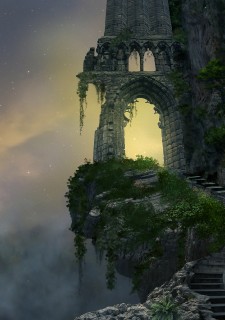 Like Bard’s Tale, Shadow Realm is a fantasy adventure where the user plays themselves in a world of magic, treasure, dragons, combat, and puzzles on their way to solving a great quest. The game is modeled on the rich storylines, adventure, interaction, and problem solving of his original games, but with a twist; the game is controlled using your voice, through one of Amazon’s new devices.

“The Alexa voice service allows you to engage the world around you using your voice. But it’s so much more,” Cranford says. “It’s the thing that ties everything in your life together simply by talking. Entertainment and gaming are just one part of that. With Alexa, you and your family can sit in a common place and explore a world together. Picture the radio shows that your grandparents and great-grandparents grew up on, where they would sit enthralled every evening, using their imagination to experience the worlds that were brought to them by words. With Alexa, you can engage those worlds interactively and seamlessly, without logging into a screen. I’m developing new worlds to explore using words.”

“With the Amazon Tap, you can bring Alexa with you anywhere. Soon this will be in everyone’s car. You will be able to explore dungeons, cast magical spells, and solve riddles while you are driving around on the freeway, using only your voice. You’ll be able to game with your friends as you are walking around, hands-free. This is going to be in schools, allowing kids to interact in a way that not only entertains them but also helps them develop a voice in today’s world. I’m excited by the possibilities that Amazon has unlocked. We’re developing numerous games and educational products for Alexa to be ready in early 2017.”

Cranford has started a new company, Days Fly, Inc. (https://daysfly.com), to focus on development for Alexa. Days Fly will offer not only its own products, but the ability for third parties to license its game engine.

“Studios can release their movies as interactive adventures, with streaming voice clips and sound effects, so that people can interact with the characters and storylines. We can take a movie or television show or any other digital product, including a video game, and make it a voice-controlled interactive experience,” Cranford states. “Amazon is changing the world with these new devices. We’re committed to making it happen.”

Michael Cranford was a pioneer in the early years of video game development. The Bard’s Tale (1985) set the stage for computer-based RPG development on a larger scale and introduced numerous original ideas to the genre. Cranford has spent the last two decades doing web application development, and is published in academic journals such as Technology in Society and The Journal of Business Ethics. He received his Ph.D. in Social Ethics from the University of Southern California in 2007. Information about Cranford and Bard’s Tale can be found on Wikipedia, and Alexa will also respond to the question, “Alexa, who is Michael Cranford?”

The Realm of Shadows is the first in a series of interactive role-playing games published by Days Fly, Inc.  To play, all you need is a device that has the Alexa voice service. Say, “Alexa, enable Shadow Realm,” and the skill will be installed for you to play. The game saves your progress automatically as you go, so you can start and stop playing at any time. You say, “Alexa, launch Shadow Realm” when you are ready to pick up where you left off.

The Realm of Shadows is a fantasy adventure. You are a person from our time who is given the responsibility of protecting the land that has been in your family for generations. The bank is attempting to foreclose on the forest, hills and streams that are under your protection, and you are committed to saving them. On a casual evening stroll from your backyard, you find a magical doorway that leads deep beneath the roots of the forest, into a realm of magic and adventure. You are caught up on a quest to save the land – both in the magical world you enter, as well as the modern world you have left. The Land is under the control of Beira, the Stone Queen, and it has summoned you to become its champion against the forces of shadow. You face those who do the Stone Queen’s bidding in a battle of wits, weaponry, and magic to rescue the Land and become the champion who is foretold of legend.

Days Fly is a natural language application development studio located in Dana Point, California, specializing in cloud-based applications for Amazon’s Alexa web service. It was founded by Michael Cranford and Mike Horn in 2016.

More information about the game and Days Fly’s Alexa-based development services can be found at https://daysfly.com.