Designed by an ex-Samsung engineer, GLAMOS is a small device that uses LiDAR tech to turn any digital screen into a fully interactive touch screen. 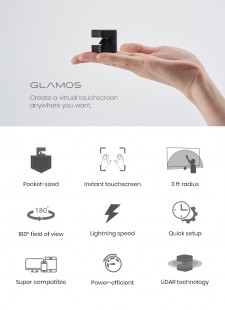 LiDAR, short for light detection and ranging, is a remote sensing technology that uses light in the form of a pulsed laser to measure ranges (distances) to a target. A LiDAR sensor fires off beams of laser light and then measures how long it takes for the light to return to the sensor.​ LiDAR technology is most commonly found in robot vacuums and self-driving cars.

GLAMOS projects a virtual 2-D screen and uses LiDAR to sense motion-activated gestures that are translated into movements on the screen of any device that it is connected to. GLAMOS is compatible with computers, tablets, and other mobile devices that run on Windows, macOS, Android, iOS, Linux, and any other major operating software.

This device can be used in numerous situations:

Coredar Inc. has announced that its campaign has received the "Project We Love" stamp as a sign of acknowledgment of creativity and innovation from the Kickstarter Curation Team. GLAMOS is now live on Kickstarter with Super Early Bird discount rewards starting at $99. A Bluetooth version is also available with prices starting at $119. Any editors, journalists, or influencers interested in receiving a sample to review are encouraged to reach out via Coredar's Kickstarter page.