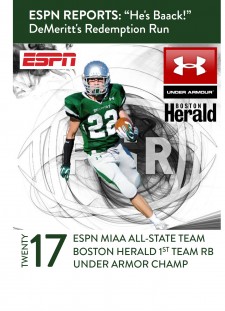 Boston, MA, August 29, 2016 (Newswire.com) - There is no one more eager to be back on the football field then #22 Devin DeMeritt. He didn’t waste anytime putting all of his off season work to good use in the first pre-season game of the year. With the first snap of the football Duxbury Dragons star running back Devin DeMeritt flew down the field for a 73 yard TD. The next time he touched the ball was for a 35 yard TD reception.

“Devin is just one of those kids who won’t take no for an answer”, NE Gridiron. Not only is he back, he’s back bigger, stronger, faster and more determined than ever before. Last year he played at 163 lbs. - he weighed in this year at 196 lbs.

DeMeritt is the kind of player who can break a defense’s spirits. “He has all the tools to be a complete running back. He thrives in pass blocking situations, is a serious receiving threat out of the backfield, and has 4.54 speed to leave defenders in the dust. With 3.8 GPA, there are a lot of well deserved eyes on DD this year.” NE Gridiron added

The sought-after student athlete out of Duxbury High School (Duxbury, MA) has already visited Holy Cross, Dartmouth, Brown, Yale and the University of New Hampshire, and has been invited to the camps of Bentley, Boston College, Dartmouth, Villanova, Lehigh, Bucknell and Delaware.

“It has always been a dream to play that the next level and I’m humbled and honored to have so many amazing opportunities. I love this game and want to give back to it as much as it has given me” Devin DeMeritt

radius financial group, inc. is a New England-based, full-service mortgage bank. Founded in 1999, radius has grown into one of the areas premier residential lending groups.