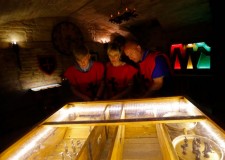 West Palm Beach, FL, September 23, 2016 (Newswire.com) - ​​The story seems so real.  Eight men and women get locked in a prison cell and have 60 minutes to escape.  They frantically search for clues, solve puzzles, or find anything that will help them escape.

One of them moves a rug and shouts, "Look what I found!."  Another says, "I found a key!"  "Look!" says a third, as he points a laser on the wall which magically opens a frame to unveil a clue.

"I am so glad we tried this. Its so different from anything else out there, we just wanted something unique. Now our party will be the talk of everyone who attended, and we can't wait to go visit another escape room."

No, this isn't real life, it's Mary and Jim Durant's 10th wedding anniversary party in their home.  Instead of opting for a DJ, a photo booth or some other form of party entertainment, they opted to try an Escape Room Party.

Escape rooms are an increasingly popular adventure game for groups of as little as 2 participants to as many as 12 depending upon the the room.  The large majority of escape rooms are found in office buildings, warehouses and retail centers.

As the popularity of the game explodes, so does the demand for more escape rooms.  Escape rooms are very lucrative and typically do not require large investments, which is why they are popping up in major cities across the U.S.  There is definitely plenty of room for growth as the majority of rooms find themselves completely booked, especially on weekends.

One company, Trapped Escape Rooms, a leading escape room designer credited with dozens of escape rooms, is making it easier for people to experience an escape room challenge by outfitting mobile party entertainers with portable escape rooms that can be set-up in someone's home in under an hour.

"We had a blast!" said Mary Durant after having failed to escape from the makeshift jail which was set-up in their home.  "I am so glad we tried this.  Its so different from anything else out there, we just wanted something unique.  Now our party will be the talk of everyone who attended, and we can't wait to go visit another escape room."

Trapped Escape Rooms isn't stopping at private parties.  They are also in the midst of producing weekend escape room challenges which will be held at hotels or resorts where participants will stay overnight and compete against other teams.  The challenge will culminate in a social/party/awards ceremony.

Room escapes have undergone a rapid evolution.  They started in Japan just a few years ago, and quickly spread throughout the world.  The U.S. was one of the last to jump on the bandwagon, and as a result, there is a large demand with a short supply.  There are now people who look for escape rooms and will travel hundreds of miles just to try a new one.

"We felt that with the huge popularity of escape rooms, there would also be new avenues for growth," said George Thomas of Trapped Escape Rooms. "Private parties are just one way we thought of to tap into this wide open market.  There are also many businesses who are looking for fun team-building exercises and want to bring our mobile escape rooms to their offices."

Last year, DreamWorks and NBC Universal's USA Network used an escape room to promote its archaeology adventure series, "Dig" with rooms in two Universal theme parks.  Earlier this year, Ford Motor Company launched the world's largest escape room to promote their Ford Escape automobile.  Hours after they announced the escape game, they were completely filled to capacity with over 1,000 players.

Presently, only a small percentage of people have participated in an escape room, or even know about them yet, however, in a world dominated by smart phone games and virtual reality consoles, real world escape rooms are quickly becoming the booming trend and are forecast to grow through the year 2018.