'Energy From Space for Applications in Space' 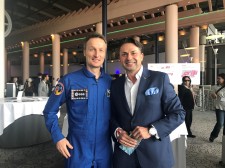 BERLIN, October 9, 2018 (Newswire.com) - The 69th International Astronautical Congress has just drawn to a close, and Holger Thorsten Schubart, CEO of the Neutrino Energy Group, felt very privileged to have been able to take part in this exciting event. In the first week of October, everybody who’s anybody in the Aerospace community met in Bremen to discuss recent developments, new possibilities, and fascinating visions for the future of space travel. To the aspects covered at this year’s Congress belonged to a wide variety of topics such as modern rocket technology, future space missions, manmade satellites, and space pollution. Emphasis was also given to the latest economic developments in the field as well as to the legal implications of space travel and satellite deployment. Holger Thorsten Schubart summarized his days at the Congress as follows: “I had the opportunity to meet many interesting people from all over the world and was able to make some very valuable contacts for our company.”

It should come as no surprise that finding a sufficient and sustainable source of energy is just as important in space as it is on earth, and this subject was discussed at length in Bremen. At the present time, solar energy is one of the primary methods used to supply spacecraft with energy, but conventional solar cells present two troubling disadvantages: Their typically large surface area is prone to damage due to debris floating in space, and they are completely dependent on sunlight.

In the near future, however, it will be possible to overcome these disadvantages through the implementation of power cells that make use of neutrino activity. These highly sophisticated power cells, so-called “Neutrino Power Cubes,” have the advantage of being able to supply energy in complete darkness. They do this by harnessing the kinetic energy created by invisible waves of cosmic radiation, transforming it into micro-vibrations in a complex resonation process facilitated by super-symmetrical coatings on a stable substrate. And because these power cells can be stacked on top of one another, they are more compact and efficient than today’s solar cells and far less easily damaged. Of course, this innovative technology still has some rough edges that need to be worked out, but it is only a matter of time before it establishes itself as the way to a higher goal and a brighter future.

The universe is exceedingly vast, and the forces in it are far greater than those available to us on our own planet. Only by tapping this virtually unlimited cosmic energy will we be able to meet the growing needs of humanity and secure our existence in the face of an ever-increasing shortage of resources. The recent breakthroughs in neutrino research that lead to two physicists receiving the Nobel Prize in 2015 or the astonishing advances in nanotechnology will most certainly revolutionize space travel in the next few years; it may take a while before this cutting-edge technology reaches the average consumer, but the gains made there can also be applied to life on earth.

Space technology and our never-ending quest for knowledge can serve to light our way in the darkness and show us the path to a better tomorrow.

NEUTRINO Deutschland GmbH is a German-American research and development company under the direction of the mathematician Holger Thorsten Schubart. The main office is located in Berlin. NEUTRINO Germany GmbH stands in close cooperation with an international team of scientists and research institutes that specialize in developing applications for the utilization of the nonvisible spectrum of the sun’s rays, the all-pervasive cosmic particles known as “neutrinos” among other things, by converting them into electricity.

Special emphasis is placed upon building and maintaining a close working relationship with universities and other institutions of higher learning in the area of pure research as well as upon establishing an international network of researchers who are active in the field of alternative energy technology.