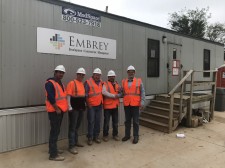 FORT WORTH, Texas, October 22, 2018 (Newswire.com) - ​​Jason Partain went to work the morning of October 2, focused on helping Embrey Partners ready the Kelley at Samuels Avenue multi-family complex in Ft. Worth for a grand opening at the end of the month. But by mid-morning, his attention turned to doing his best to save a man’s life.

“Someone ran into the office to report an emergency on the job site, so I immediately called 911 and then hustled out to see what had happened,” Partain recalled. “The man in trouble had complained of shortness of breath while he was unloading doors for the apartments, and so he sat down. When I got to him, he was laid out, and I recognized that glazed look in the gentleman’s eyes. I knew he was in critical shape, so my training and instincts just took over. I began CPR chest compressions and continued working on him until the paramedics arrived. They had to use defibrillation paddles on him, and thankfully were able to get him to the hospital in time to save his life.”

It seemed like several minutes elapsed before the paramedics arrived, but all I could think about was helping this, man and keeping him alive for his family. You hate to see anyone suffering like that and so I just did what I could to help.

Partain, 38, is a project engineer for Embrey Partners and joined the company 18 months ago. Previously, he had worked in the construction business in Colorado before returning to Texas, his home state. Partain served four years as an infantryman in the Marines and deployed to Afghanistan and the Philippines. After his military service, he attended Texas Tech and earned a bachelor of science degree in wind energy and a master’s degree in business administration. Partain is married with two children. He and his wife are expecting a third child in May.

“It seemed like several minutes elapsed before the paramedics arrived, but all I could think about was helping this man, and keeping him alive for his family,” Partain said. “You hate to see anyone suffering like that and so I just did what I could to help.”

“We call our safety meetings ‘Toolbox Talks,’ and Jason is responsible for those at his project in Ft. Worth,” Brinkmann noted. “In addition to keeping workers focused on doing their jobs safely, he also is responsible for closing down the job site each day to ensure that there aren’t any accidents overnight as well.”

“I haven’t had a chance to see the gentleman since he has been in the hospital, but I thought I should give him some time with his family first,” Partain said. “I was extremely happy to hear that he had survived that terrible experience and will be discharged from the hospital fairly soon.”

“I am so glad Jason Partain is on our team, for a lot of reasons,” Brinkmann said. “While we teach safety all the time, you never know how people will respond in an emergency. Jason showed us how it is supposed to happen, though. His calm demeanor and take charge leadership helped save a fellow worker’s life. I know he’s said he was just doing what he could to help. But, that was a true feat of heroism, and I know his own family and all of us here at Embrey are very proud of him.”

Update: At the time this story was first written, the outlook of recovery for the gentleman who had collapsed due to heart problems on the Embrey Partners job site seemed optimistic. Sorrowfully to say, the gentleman’s heart ultimately failed and he passed away.

“We are all very sad to hear about the fate of our subcontractor’s employee,” said Rich Brinkmann, Embrey Partners project manager in San Antonio. “We are planning to recognize our employee Jason Partain for his selfless act to perform CPR on the gentleman after he passed out on a job site. Jason’s efforts gave the man a chance to get to the hospital where doctors could care for him. The Embrey family sends its sincere condolences to the family and our subcontractor.” 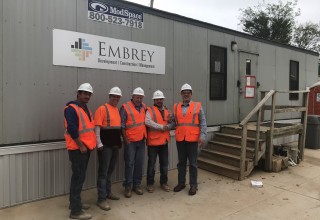 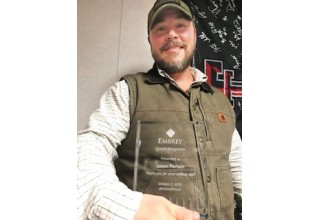