Educators Are Raving About 'Business Idea' Card Game on Kickstarter 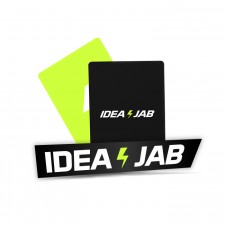 Idea Jab™ is a tabletop card game that helps players generate their own original business ideas. Creators Matt Callegari & Alex Laughlin invented the game to help aspiring entrepreneurs discover their own big ideas, but after demoing their game with local universities, colleges and start-ups, realized the game was even more valuable when used as a classroom activity and team-building exercise in the workplace.

"'Business Ideas 101' isn't a course schools typically offer,"  said Anna C. Lampe PHD, Executive Professor of Management and Undergraduate Program Director at the Helzberg School of Management (AACSB) "which is why I think this game is going to rapidly catch on in classrooms nationwide...The game immerses students in this all new experience of competing and collaborating to develop their own new business ideas, helping to strengthen their creative thinking skills and restore confidence in their own ideas."

The rave reviews they've received from educators allowed them to secure an appearance at the annual USASBE Conference held in Philadelphia, PA, this January 2017. They will also be presenting at 1 Million Cups KC on February 15th in Kansas City, MO.

As word of their game spread and the number of educators actively backing the young entrepreneurs skyrocketed, the duo uncovered what they describe as "an enormous opportunity to revolutionize both classroom learning and workplace team-building" and are now swiftly developing an extensive line of even more robust classroom and workplace products based on their original game.

"Innovation in the classroom is long overdue," said Peter J. Florzak MBA, Adjunct Professor at Rockhurst University, "which is why I'm so excited about this game, because it finally gives professors like me an easy way to engage with students and get them excited about entrepreneurship."