Pathos, action, feelings — there is absolutely everything. On the cover — list of the twelve tracks, including I'll never let go, Shores (Берега), Invincible, Get Real with My Heart and many others, as well this album includes 7 videos. 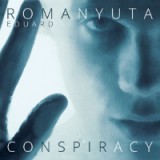 Eduard Romanyuta - a young, but rapidly gaining popularity Artist from Ukrainian show business, the winner of many national and international song contests and festivals.

Several years ago, Eduard performed at the Presidential New Year parties, and now he has a solo career and millions of views on YouTube. Eduard was awarded at many national and international song contests and festivals. Eduard Romanyuta cooperated with European and American songwriters, performed with T.A.T.U. and Gorky Park. “…Yesterday — on the shoulder of the president, today — at the forefront of showbiz…” as colleagues speak about him.

Songs by Eduard Romanyuta are frequent guests on popular TV and radio stations in Ukraine, Europe and CIS countries. Singer shot his videos in the United States and France, where he worked with famous directors. Among the achievements of the singer is Best Song in a Foreign Language award from OE entertainment channel for the song I'll Never Let You Go. In addition, his hit Invincible was awarded as the Video of the Year.

Detailed information on the debut album, as well as a complete list of track titles and video clips are available on the official website of the singer: http://romanyuta.com.ua/news/eduard-romanyuta-predstavlyaet-svoj-debyutnyj-albom-conspiracy/

Do not miss the Eduard Romanyuta’s debut album Conspiracy. Twelve cherished tracks are waiting for you on iTunes!

Kami Entertainment Talks About 3 Things People and Their BFFs Can Do in Manila for Less Than $20
If one wants to do something exciting yet affordable budget in Manila, there's the perfect To Do list for less than $20 (PHP 1000).
MediaNews - Jun 20, 2018

Amasty on How GDPR Changes the Magento Extensions Market
After GDPR took effect, webstore owners have to reconsider the ways they engage with European customers. Amasty shares their experience of adapting Magento modules to the new law.
MediaNews - Jun 6, 2018
Newswire