"Our responsibility is to do no harm and to protect from harm," says Dr. Rajamannan. 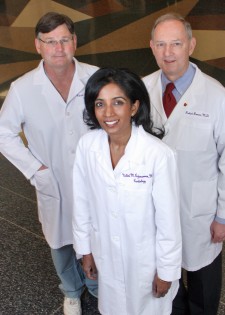 Excerpt from the meeting between FDA CDRH and Dr. Nalini Rajamannan:

“As a Mayo Clinic/NIH trained physician-scientist, chairman of the NIH Working Group for Valvular Heart Disease, and a board-certified Cardiologist, I am gravely concerned. I personally witnessed multiple heart surgery patients being used as human research subjects without their consent.

Thank-you Mr. Desta for accepting the meeting on behalf of the HHS Secretary and the FDA Commissioner who are busy with the fight against the coronavirus in the United States and globally.

I have several new revelations to disclose to you today regarding the research violations, which occurred during the unauthorized testing of heart devices to report to the HHS Secretary and to the FDA Commissioner.

The most important revelation is that another patient has learned he was secretly enrolled in the Myxo Study, suffered a heart attack which was not disclosed for 12 years and the heart attack was not reported to the patient during the hospitalization for the experimental heart surgery.

The heart attack was never published in the outcomes of the clinical trial. The same trial used to eventually clear the device by the FDA with the new name and new indication.

All of this occurred right under the watchful eye of Health and Human Services.

Beginning with my first day of Mayo Medical School – now the Mayo Clinic Alix School of Medicine – I received extensive training in ethics regarding the protection of research subjects and the mandatory requirement to report violations.

As an NIH awardee of the American Recovery and Reinvestment Act, I have lifelong whistleblower protections. And that same ARRA funding is linked to reporting responsibilities under the federal code 46CFR45 and 21CFR820.30.”

“If a device is supposed to get cleared by the agency first before you’re marketing it, we consider that investigational,” Dr. Jeffrey Shuren, head of the FDA’s medical device branch, told The Chicago Tribune in 2011.

The patients and the physicians await the FDA’s decision to inform the nearly 1000+ patients who unknowingly received the recalled devices the Model 5100 and the Model 4100.

Dr. Nalini Rajamannan is a heart valve expert in the field of cardiovascular medicine. She earned her undergraduate science pre-professional degree from the University of Notre Dame, her Medical Doctorate from Mayo Medical School and her post-graduate training in Internal Medicine and Cardiology at the Mayo Clinic and Research Fellowship on the NIH training Grant. She also worked at the Mayo Clinic as a staff consultant in Internal Medicine and an Associate Professor of Medicine at Northwestern University and the Lakeside and Westside VA. Currently, she practices consultative valvular medicine and Osteocardiology at Most Sacred Heart of Jesus Cardiology and Valvular Institute, WI.​

Dr. Rajamannan Reports to Northwestern University, Chicago IL VP: COVID-19 Non-Compliance in Clinical Trials
COVID-19 - The letter to the VP for Research
Most Sacred Heart of Jesus Cardiology - May 22, 2020

Dr. Rajamannan Replies to FDA's Demands of New Evidence Surrounding Harm to Patients in an Open Letter to Members of Congress, the FDA Commissioner Hahn and HHS Secretary Azar and the CDC and the World Health Organization
An Open Letter to The Who/CDC/FDA/HHS/Congress Regarding Faulty Heart Devices
Most Sacred Heart of Jesus Cardiology - Mar 3, 2020
Newswire