It is for this reason that the Greek Cypriot side expected - and still expects - to find in the leadership of the Turkish Cypriots an ally in its efforts to reduce this serious problem within the framework of striving for a solution. 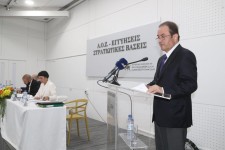 ​​​The practice of illegal settlement in the occupied northern part of Cyprus of populations from Turkey has always been one of the most dangerous aspects of the continuing occupation, violating the demographic fabric of the real inhabitants of Cyprus. Has this been forgotten or is this considered as solved by only fixing the population percentages?

The first victim of this illegal settlement Turkish policy was and still is the Turkish Cypriot community itself. It has been reduced to a minority vis-a-vis the settlers. It has seen its collective cultural character forcibly changed, and it has more or less lost control over its own future.

It is for this reason that the Greek Cypriot side expected – and still expects – to find in the leadership of the Turkish Cypriots an ally in its efforts to reduce this serious problem within the framework of striving for a solution.

The Greek Cypriot side is ready to accept, for purely humanitarian reasons, that a number of Turkish settlers must have the right to remain in Cyprus as citizens of a reunited island. What cannot, however, be accepted is that every individual settler shall have the right to remain and eventually have the possibility to acquire citizenship. For example, on the basis of the Annan plan, practically all settlers from Turkey could remain and some would acquire citizenship immediately. That all settlers would in fact have or acquire the right to stay was explicitly stated by Mr. Hanney, a member of the UN negotiating team. Such a “vision” for our common country should not be acceptable either to the Greek Cypriots, or to the Turkish Cypriots who are also victims of the illegal settlement.

Any explanations given to alleviate Greek Cypriot fears about the stay of the settlers, dissipated when all settlers were allowed to vote at the referendum.

The fact that illegal settlement is a flagrant violation of international law and must not be tolerated by the United Nations Organisation is indisputable in accordance with: Art. 49 (6) of the Geneva Convention and its Protocol I, as it was interpreted by the EU, the USA State Department, the UK, the ICRC, all aiming to “prevent practices adopted during World War II of such population transfers for political and racial reasons or in order to colonize occupied territories”. Also, the Statute of the International Criminal Court, Art.7(1)(d) includes such illegal practices under “ethnic cleansing” and all these provisions have attained the status of “customary international law”.

The “electoral” behaviour of the settlers to date shows that Turkey is exercising a catalytic influence on them. In case of a federal solution, their participation in elections would essentially determine the Turkish Cypriot leadership and its representatives in the Senate, the Parliament but also at the level of the Head of State. Obviously, in such a case continuous deadlocks could occur. Indicative are the present demands of the Turkish side for a sweeping “positive vote” at every level and every organ or institution of the “Federal State”.

The Greek Cypriot side has accepted a bizonal, bicommunal federation, but a federation only with the Turkish Cypriots, as opposed to one with Turkey or the mainland Turkish settlers.

Do the Turkish Cypriots want the same thing as the Greek Cypriots or do they aim only at a transitional and temporary settlement, on instructions from Ankara? If so, they are aiming only at partition in the end, using also the demographic change to prepare for the collapse and dissolution of the Federation.

Dr. Kypros Chrysostomides Believes That Independence is the Normal Situation of States - Cyprus Not Excluded
In the search for a solution for the Cyprus Problem, the respective leaders of the parties in the negotiations should strive for the welfare and the prosperity of the Cypriot people and look after and protect their interests.
Webarts - Sep 23, 2019