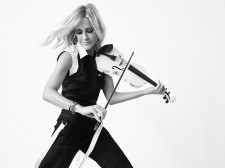 "I love the tone of old, non-amplified, real acoustic fiddles, and Wood Violins are the closest thing I have found to that sound,” said Maguire. “They play beautifully!"

The Nashville electric violin is the company’s newest model and was created to appeal to the country music market. Its design is perfect for players who want a great looking and sounding electric violin that still maintains a “traditional” vibe.

The Concert Series is an acoustic/electric instrument that can be incorporated into a 21st century experience.

All of the tour instruments were painted white to match the Dixie Chicks’ tour colors. All instruments feature D’Addario Prelude strings, the string of choice for Wood Violins.

“The Wood Violins instruments for the tour are simply beautiful, and I was particularly impressed with the setup,” said Billy Henry, tech for Martie Maguire, The Dixie Chicks.

"I’m thrilled that a musician of Martie’s caliber chose us as her instrument of choice for her new tour,” said Mark Wood, president, Wood Violins. “Her reputation and stature as a fiddler in the music world is unparalleled. As dedicated partners in her success, our master craftsmen delivered her what we believe are the very best electric violins on the market today.”

The multiple Grammy Award®–winning and multi-platinum selling band will kick off their highly anticipated North American tour, produced by Live Nation, on June 1, 2016 at the Riverbend Music Center in Cincinnati, Ohio. The DCX MMXVI Tour will visit more than 40 cities throughout the U.S. and Canada with dates lined up in New York City, Los Angeles, Toronto, Chicago, Vancouver, Washington DC, San Francisco, Philadelphia, Boston and more.