Dherbs CEO, A.D. Dolphin, Gives You the Raw Facts About Cleansing on the Steve Harvey Show

A.D. Dolphin, CEO of Dherbs Inc., will appear on the Steve Harvey Show on Monday, February 6th, 2017, to talk cleansing and raw foods. There's more to a raw-foods diet than salads and smoothies, so A.D. demonstrates how to make simple and delicious raw recipes you can eat while cleansing. 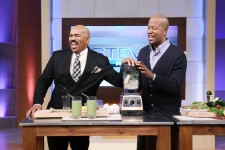 LOS ANGELES, CA, February 4, 2017 (Newswire.com) - Dherbs Inc., home of the Full Body Cleanse and premier online resource for herbal supplements, is showing millions of people how to reclaim their health via cleansing and raw food recipes.

A.D. Dolphin, CEO of Dherbs Inc., will appear on the Steve Harvey Show on Monday, February 6th, 2017, to demonstrate how easy it is to make raw food recipes. A.D. will also talk with Steve Harvey about how the Dherbs Full Body Cleanse recently helped Harvey lose 12lbs. It was a journey that Steve completed before, but he made it through this time with A.D. helping him along the way.

While participating in the Full Body Cleanse, the person must eat a raw-foods diet consisting of fresh fruits, fresh vegetables, raw nuts, and seeds. A.D. shows that eating raw foods is much more than salads and smoothies. He gets creative and makes zucchini noodles, raw walnut tacos, and a kale smoothie that tastes like ice cream. All three of these recipes have ingredients that offer essential nutrients you need in your daily diet. Get on board the raw food train to head toward a healthier lifestyle.

Tune in to “Steve Harvey” on Monday, February 6th, 2017, to see A.D. make raw recipes that can open the door to a healthier you. “Steve Harvey” airs weekdays. Check local listings or go to http://www.steveharveytv.com/watch/ for time and channel.

Founded in 2004, Dherbs, Inc. is one of the world’s leading online herbal supplement companies. Its flagship product, the 20-Day Full Body Cleanse, has been used by over 3 million people all over the world to optimize their health and help them lose weight.

Founded in 2004, Dherbs, Inc. is one of the world's leading online herbal supplement companies. Its flagship product, the 20 Day Full Body Cleanse has been used by millions of people all over the world to optimize their health.

Dherbs CEO, A.D. Dolphin, Explains Why a Healthy Colon is the Key to a Healthy Body on the Real
A.D. Dolphin, the CEO of Dherbs Inc., will appear on The Real to talk about cleansing and the importance of proper waste elimination. The average person can hold up to 20lbs of waste in the digestive tract, and A.D. has tips and a very special product to help you keep your colon healthy.
Dherbs - Apr 17, 2018