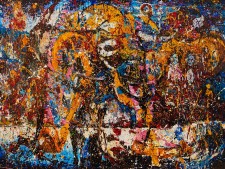 LOS ANGELES, October 22, 2020 (Newswire.com) - ​The COVID 19 lockdown has afforded Roostaei 8 months in which he has been able to concentrate, uninterrupted on producing a new body of work. He plans an exhibition in early 2021 in China where these works will be seen for the first time. It will take place at the Museum of Contemporary Art in Beijing in early Spring. Davood Roostaei brings magic to every art piece he creates. The L.A based artist does this in two ways; through a technique called Cryptorealism which he developed early on in his career, and through the magical images he selects to render an understanding of the world. Like the magician, Roostaei plays with perception, initially hiding images from the viewer which on later examination are revealed. Renowned American art historian and critic, Albert Boime, describes Cryptorealism thus: "a kind of magical eclecticism, which is a game of hide-and-seek that Roostaei plays with the spectator".

Art history is a history of revolutionary moments. Impressionism - with its emphasis on the feelings evoked in the artist by the reality they saw before them - was a dramatic break in technique from the representational style of the Renaissance. Modernism is again in sharp contrast to that which came before it. Abstract Expressionism marked another rupture, again conceiving of art making in a very different way. And now contemporary Postmodernism radically differentiates itself by recombinations of myriad art techniques borrowed from the various movements.

There will be other movements ahead of us, likely exhibiting those same revolutionary moments.

In his 20s Roostaei was working in Germany, the country where he was to develop what is now known as Cryptorealism. In 1987, the seeds were sown of this new technique and way of thinking, inspired by both his political and artistic experiences. He originally saw this work as fitting within abstract Surrealism. It was then aptly bestowed the name, Cryptorealism, in 1990.

Cryptorealism directs the viewer to consider alternative perspectives. While often hiding images with first glance, in this way making the viewer an active participant in the revealing of meaning.

According to acclaimed German art historian and critic, Hanns Theodor Flemming, "Cryptorealism is a technique which brings together the major currents of contemporary art, realism, and abstraction, from both traditional and modern-day aspects, into an original state of unity with individual identification".

Flemming states: "at first glance, Roostaei's paintings give an abstract-tachist impression, but the longer you observe, you will find that they have a clear meaning and message at their core, this also causes an exotic visual experience for the spectators of his paintings". In Flemming's view, "Cryptorealism is an art form of enigmatic expression having realistic motifs taken from a wide range of themes from antiquity to the present and future".

Roostaei illustrates the problems of time and transience, the everlasting metamorphosis of nature and life, as well as his humane message to all fellow beings in his work.

According to Boime, "Roostaei paints compositions from eccentric angles and viewpoints and often depicts forms that metamorphose in a twinkling of an eye. His work consistently discloses disguised and reversible imagery that sends the viewer on an optical steeplechase. Roostaei's energetic spatial fields fairly explode with dense imagery and spattered paint, combining a kind of Jackson Pollock approach with the Old Masters and popular imagery".

Through the layering of images in his paintings, Roostaei constructs multiple perspectives, which he then covers by a veil of exuberant splashes of color, giving his work an energetic and primal effect, rendered even more so by the fact that he does it all without a paintbrush, using only his fingers to execute his paintings. He has forgone the use of a paintbrush since 1986, a method that enables him to connect more viscerally with his work.