'Dad in a Cheer Bow!' Book Released on Amazon 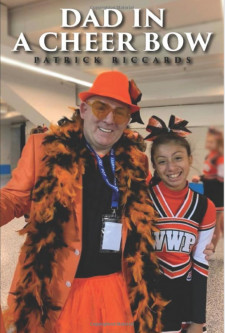 FLORENCE, S.C., July 1, 2022 (Newswire.com) - "Dad in a Cheer Bow!", a book published by author Patrick Riccard, has been released on Amazon. The book discusses how with so much time and training involved in cheerleading practices, cheerleading has become a popular and competitive sport consisting of people with nerves of steel and an immense determination to win championships.

Consequently, leading a team of cheerleaders is not the easiest responsibility to have. As exciting and fulfilling as this experience can be, having a coaching career requires you to have efficient team-building and guiding skills that work well with all kinds of individuals.

Fortunately, we have the perfect example to learn from - highly acclaimed cheer coach Patrick Riccard wrote a memoir called "Dad in a Cheer Bow!" where he has talked about his experiences coaching his daughter and her competition cheer squad.

He spent four years as a cheer coach, learning and teaching so many new things to many spirited young girls who were determined to win any challenge before them. With absolutely no experience or understanding of how cheer worked, this memoir shares the struggles and joys of Riccards' cheer coaching journey.

The book has been divided into five parts about his cheer journey. The fifth and last part of the story focuses on what he had learned over the years and how other cheer coaches can take a lesson away from it.

The book journeys into the author's life when he decides to move to New Jersey with his wife and daughter, Anna. And since his daughter had always been passionate about playing sports, Riccard made sure to be present at all of her sports events, showing just how valuable their father and daughter relationship is. But after Anna lost her motivation to continue cheerleading after not winning a series of competitions for Disney, she tried again when her father would become the cheer coach. Prior to the series of competitions for Disney, Riccard had decided to become a cheer coach.

The book explains how to be an exceptional coach by sharing his chronicles as he visited coaching clinics, attended different sessions for improving coaching abilities, and even took the necessary law precautions as he was working with young girls. The book explains how there was a lot of trial and error along the way - girls not getting together and cyberbullying were just a few of what he had to help the girls go through. There were several championships lost over the first few years, but Riccard was relentlessly trying to find new ways to help improve his team.

Till the end, he never gave up on his cheer team winning, and eventually, the team began to achieve the successes they had long been waiting for - another reason why so many coaches are inspired by his story and have learned so much from his experience.