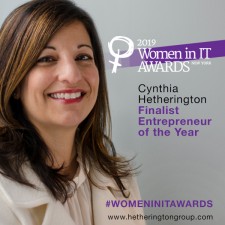 WANAQUE, N.J., March 21, 2019 (Newswire.com) - ​​​​​​Cynthia Hetherington, founder and president of Hetherington Group (Hg), has been shortlisted with nine other global women for the prestigious 2019 Women in IT — NYC Entrepreneur of the Year Award. Organized by business technology site Information Age, the awards were launched as a platform to celebrate women in technology.

"The Women in IT Awards has grown significantly since its inception five years ago. We have been blown away by people's passion and enthusiasm for this cause. Last year's event in New York was spectacular and this year's event will dazzle," said Nick Ismail, content editor, Information Age. "This year, we received over 500 nominations, showcasing an amazing array of talent across North America's technology industry. All of the finalists deserve a massive congratulations for the achievements that have resulted in them being shortlisted for an award. We can't wait to welcome everyone for one of the biggest nights in technology on March 28."

"It is an honor to be shortlisted with such an outstanding group of women tech leaders," stated Ms. Hetherington. "Given the limited number of women in this ever-expanding industry, opportunities to celebrate women's achievements in and contributions to information technology serves as a beacon of light, calling young women to join us as we make our way into frontiers previously closed off to us."

Headquartered in New Jersey, Hg is a consulting, publishing and training firm that leads in due diligence, corporate intelligence and cyber investigations. For the past three years, Hg has shown a consistently strong 50 percent growth and is on track to expand operations with a 50 percent increase in investigators and a 20 percent expansion in support staff. Ms. Hetherington has authored three books on how to conduct cyber investigations and annually trains over 7,200 intelligence professionals on best practices. She shares her expertise in this increasingly data-intensive, cyber-focused world through the publication of an industry newsletter and an online blog.

Since its launch in 2015, the Women in IT Awards have showcased women in technology in London, New York, Ireland and Silicon Valley. This year, the awards series will expand to celebrate women in technology in Asia, Berlin and Canada for the first time. This growing awards series acts as a flagship and high-profile platform to support the industry in its mission to move the dial on gender.

According to the National Center for Women & Information Technology, the number of women working in IT in 2017 was a mere 26 percent, with women of color representing only 10 percent of that number (five percent Asian, three percent African-American and one percent Hispanic). Cybersecurity Ventures estimates that by the end of 2019, a mere 20 percent of women will be in the global cybersecurity workforce, up from 11 percent in 2013. The Women in IT Awards series aims to tackle this issue and redress the gender imbalance by showcasing the achievements of women in the sector and identifying new role models.

Cynthia Hetherington, MLS, MSM, CFE, CII, applies her expertise of library science and information systems to provide clients with strategic insight into research and complex investigations. During her career, she has assisted clients on thousands of cases with internet investigations related to employees, intellectual property and reputation management. With a specialization in the financial, pharmaceutical and telecommunications industries, her cyber investigations have recovered millions of dollars in high-profile corruption cases, assisting on the investigations of the top two Ponzi cases in United States history.

As a former librarian, Ms. Hetherington entered the security profession in the 1990s when most, if not all, security role models were men. She had to learn quickly, often on her feet, that she had the same skills they possessed and, sometimes, even more finely honed skills. Her early and challenging experiences are the foundation of her deep commitment to help more women enter the IT and security industries.

Ms. Hetherington shares her experiences and expertise as a keynote speaker and contributor at women-focused technology events and conferences across the U.S. She is an active member in the Women in Security Forum and collaborates with The National Center for Women and Information Technology on drawing young girls into the profession. Ms. Hetherington serves as a lecturer and mentor to CybHER.org and RocketGirls at CyberSpace Camps held at the Kennedy Space Center.

In 2012, she was awarded the James Baker Speaker of the Year by the Association of Certified Fraud Examiners. Enterprising Women Magazine honored Ms. Hetherington with a 2019 Enterprising Woman of the Year Award and she is the recipient of the 2019 CybHER Warrior Award.

About the Hetherington Group

With over two decades of expertise, the Hetherington Group is a leader in investigative due diligence, corporate intelligence and cyber investigations. Headquartered in Wanaque, New Jersey, Hg's investigators and analysts track down and expose vital data on national and international investigations; train thousands of investigators in the public and private sectors annually; and share their expertise in this increasingly data-intensive, cyber-focused world through the publication of an industry newsletter and recognized investigative reference books. Hg is a certified National Women Business Owned Corporation, a certified Women's Business Enterprise, a NJ Women Business Owned Corporation and NY-NJ Port Authority Women-owned Business Enterprise.

Hetherington Group is a leader in investigative due diligence, corporate intelligence, and cyber investigations. 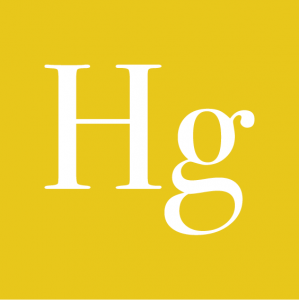