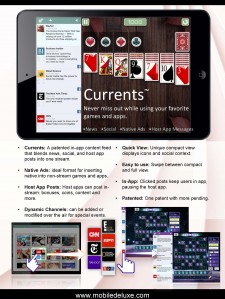 Santa Monica, CA, May 3, 2016 (Newswire.com) - CURRENTS is changing way the typical social news app works by moving the social news feed into other apps, seamlessly integrating various media sources into a single easy-to-navigate, channel-based in-app stream. This groundbreaking and conveniently versatile in-app service allows users to custom select the news, video and other social media channels they want, presenting them all in a single consolidated view. Users can easily multitask between the host app and Currents feed, swiping Currents from compact to full mode when the social media context indicates a headline may be of particular interest. Without requiring any log in, Currents keeps ongoing access to hundreds of news and entertainment sources, all in a simple, channel-based format.

Originally conceived by MOBILE DELUXE to allow users to stay connected to their social networks and news even while playing their games, the many other advantages of CURRENTS were not lost on its developers. "We're all increasingly plugged in and we want to know what's going on and what's happening now, no matter what we're currently engaged in," acknowledges MOBILE DELUXE CEO and Co-Founder Josh Hartwell.  "But most social news apps want you to stay within their confines, greatly limiting the users' ability to browse and discover. On the other hand CURRENTS lives in-app - virtually any app - and allows users to follow any headline they choose, and browse further if they find something else of interest, all while not losing their place within their original game or app."

Because CURRENTS takes the user directly to the site they need while pausing their primary game or app, content publishers benefit from the click to their site that they don't always get with apps that prefer users stay within their platforms. It is equally convenient to developers for other functions such as the host app being able to post to the stream, sending messages, providing in-game currency, or other prompts without halting the user's activity. CURRENTS is available on iOS within Solitaire Deluxe® Social, Sudoku Deluxe® Social and Casino Slots - Triple 7s. For more information about CURRENTS and MOBILE DELUXE, please visit: www.mobiledeluxe.com.

Founded in 2003 and headquartered in Santa Monica CA, MOBILE DELUXE is the trusted source of premium casual games available free for the iPhone, iPad and Android devices. A first mover in the app space MOBILE DELUXE positioned itself as the industry innovator for the casual consumer with games such as "Solitaire Deluxe," "Big Win Slots" and "Big Win Blackjack". This same focus on the casual consumer has lead to their most innovative product, CURRENTS, a revolutionary way of delivering news, entertainment and social media in-app. With innovation and entrepreneurship at the forefront of its ideology and by partnering with esteemed organizations such as Amazon, Apple, Google, Facebook, Verizon Wireless, AT&T and Disney, MOBILE DELUXE continues to distinguish itself as a leader in the app space.  MOBILE DELUXE - games you know, done right.