Justin Forkuo, owner of 290 Auto Body, Inc. in Worcester, MA, created an amazing set of tools that enable estimators and appraisers to take effective photographs faster and easier than ever before.

The tools are saving time and money for body shops and other car companies such as Enterprise Rent-A-Car by cutting the repair estimating process in half. Now, Axalta is recommending Forkuo’s system to its customers worldwide. The company, Crash Point Systems, features a series of wands that has proven to be an educational training tool that helps literally everyone in the shop from the minute the car appears at the facility through the entire repair process.

A few years ago, Forkuo saw a definite need for Crash Point Systems, prompting him to create a solution that has gained major momentum and garnered top reviews.

“I was looking for a better method to perform vehicle appraisals by creating a standard process for taking photographs and stripping all of the guesswork and headaches out of the equation,” he said. “My shop was spending a ton of time on the phone with insurance companies because there was confusion over what a picture meant or what it was for. Some of our guys also ran into problems taking pictures that couldn’t be easily interpreted, and now my entire auto damage appraiser crew uses our system in one way or another. It’s an educational tool that is simple and easy to learn and highly affordable, so that’s why shops are integrating it into their production and ordering multiple systems.”

The current methods weren’t working and were hamstringing his busy shop, so Forkuo started brainstorming and finally found his magic wands.

“We were wrestling with markers, stickers and magnets, but all those methods were highly problematic. The stickers didn’t always stick; the magnets fell off and scratched the vehicles, and the markers required a clean surface and were often washed off and then put back on several times. All of these obstacles added even more prep time to the estimating process and it became a costly complete nightmare.”

Forkuo’s system consists of two mobile phone holders and color-coded, lightweight, durable plastic polymer “wands” that come in three sizes and use well-known industry terms to relay accurate information to everyone involved in the repair process. As a touch-less system, there’s no need to write or attach anything to the vehicle’s surface, thereby eliminating prep work.

The tools also aid those who have difficulty taking good pictures, regardless of their level of experience or what language they speak.

“Most of my technicians speak Spanish and their English is very limited, so that’s when I started using the color-coded wands,” Forkuo said. “Right away, I could see that we were saving time, because we weren’t going back and forth with the insurance companies over the phone. Instead of sitting on hold, which is highly unproductive, my guys were able to keep moving and getting more done.”

Now, the Crash Point System is available in 32 different languages, but most of his techs refer to each one by its color rather than the process listed on each wand.

“This tool eliminates all of our problems with communication about repairs,” Forkuo said. “It doesn’t wear out, run out or otherwise need to be replaced. There’s no prep work and pictures can be taken in any weather condition. It makes taking pictures much easier, and it clears up all the confusion as to why a picture was taken, so my guys are able to keep moving and get more done because they aren’t wondering why a certain picture was taken or on the phone with the insurance company trying to explain it to them. Also, the language problem is solved through the color-coding system we use.”

The color codes are direct and easy to decipher. Green is R&I; yellow is repair; red is replace; blue is paint; and orange is POI (Point of Impact). They come in three sizes to accommodate several applications.

“For estimators out on the road, we have a set of 7-inch wands that are pocket-size,” Forkuo said. “We also offer them in 18-inch and 25-inch sizes depending on how they’re being used. For example, many people like the 18-inch wands because they allow you to get close enough to touch the area you’re pinpointing, but far enough away to get a clear shot.”

To order a set of wands from Crash Point Systems, simply go online at www.crashpointsystems.com and order the package that works for you. The Deluxe Bundle is the ideal solution, featuring all three sizes and two mobile holders.

“The product is straightforward and ordering the product is the same way,” Forkuo said. “Our entire concept is to simplify the process and save time, so we’ve also made it easy to order our system. After using it just one time on one vehicle, the product will already pay for itself, so it’s a no-brainer.” 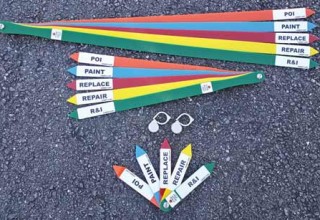 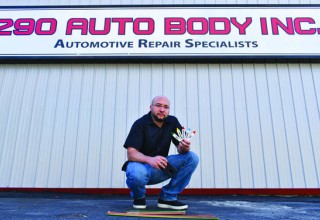 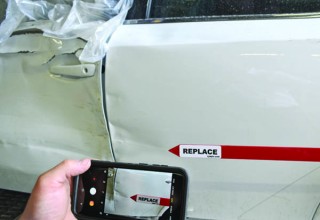