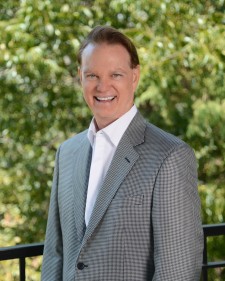 DALLAS, December 5, 2018 (Newswire.com) - Craig Keeland, author, entrepreneur, and philanthropist has just released his second book, Vision To Victory, through CIS Publishing. Vision To Victory is an uplifting and highly motivational book encouraging personal growth for a triumphant future. Vision To Victory is available in paperback on Amazon and a free version can be downloaded on his website, CraigKeeland.com.

Keeland is also the author of Developing the Champion Within You, written to inspire personal excellence.

The author grew up attending church on a regular basis. But his life was profoundly changed in 2005, when he visited Lakewood Church in Houston, and heard the teaching of Pastor Joel Osteen. His spirit was stirred. This was the first time he remembers truly feeling the presence of the Lord. This spiritual awakening led him to write his first book, and to this day he attends Lakewood Church in Houston and is very close to the Osteen family.

Craig was born in Dallas, and his grandparents, whom he stayed with quite a bit, were a large part of his upbringing. His parents had moved to Orange, Texas to a small, white wooden rental home with a single bedroom and bathroom. The home had few amenities, and nothing to cool the air but a ‘swamp cooler’. Their car, a used Chevrolet, also had no air-conditioning. There were not a lot of creature comforts for a young family. But by the time Craig turned five, they had saved enough to move into a home that had two bedrooms and air-conditioning. They were able to purchase another used car and that too, had air conditioning. They even went out to eat at a restaurant for the very first time as a family. Life was getting more enjoyable.

Craig’s life as an entrepreneur began at the tender age of six.

Keeland went door to door introducing himself to the neighbors and selling tickets to ‘Hamburger Night’ at the church he and his family attended. This early experience built up his confidence and began to shape his character.

The summer Craig turned seven, he began mowing his grandparents’ yard with a push lawn mower. With the money he earned, he decided to buy a self-propelled lawn mower. That following year, he expanded his mowing service by asking folks in the neighborhood if he could mow their yards as well. Thus, his first business began in earnest. He quickly became the ‘go-to’ kid in the neighborhood as he was dependable, hard-working and would not quit until the homeowner was pleased.

When he turned 13, Craig retired his mower and began working for a local bank keeping their office supply room organized. He was responsible, ambitious and eager to please. By the age of 16, he had worked his way up to teller and then into the collections department where his compassion and gracious demeanor gained him a high level of respect among his customers and superiors, alike.

Craig was a hard worker and saved every penny he made. He understood the value of a dollar because he knew how hard it was to earn one. At 16, he paid cash for his first car. Even at that young age, Craig recognized a good deal when he saw one. The car was an older model, but it was a good value and he knew it. The following year he sold it for $2000 more than he had paid and was then able to afford his teenage dream car, a used Pontiac Trans Am.  The moral to the story: Know what you want, save your money and you will eventually achieve your goal.

Craig’s father, grandfather, and great-grandfather served proudly in the US military. Craig, too, felt the calling and wanted to share in his family’s legacy of serving America. But just months before he graduated high school, the Vietnam war ended. Craig’s plan to become a Marine also came to an end. The military was not taking on any new enlistments.

Therefore, Craig focused on a college career although he did not have the most distinguished record in school. He had failed the first grade once and almost twice. He was dyslexic, but that was not a recognized diagnosis at that time. He struggled each year just to pass.

He ultimately graduated 6th from the bottom of his high school class of 361 people – but this did not dissuade him from pursuing a college degree. In fact, he set a very ambitious goal to receive a business degree from a college in three years instead of four.

His career began at a local junior college and he was then accepted by the University of North Texas as a full-time student. He was then fortunate enough to be offered a partial scholarship to SMU and graduated with a business degree in three years. Mission accomplished.

After graduation from SMU, Craig was accepted by the Wharton School of Finance, at The University of Pennsylvania, an ivy league school. This was quite an achievement for a young man who graduated close to last in his high school class.

His goal was to complete his M.B.A. in one year even though it was a two-year program. He attended classes year-round, but failed his very last course in his last semester. He didn’t have the money to stay the following semester to complete that one course. So, he worked hard, earned the money and came back two years later, when he completed the course and achieved his MBA. While it was not his preferred timing, the powerful lessons of determination and resiliency have been themes in his life ever since.

As he was finishing his M.B.A., he went to work for a very successful entrepreneur. Keeland became his right-hand-man and due to a very fortuitous and unique set of circumstances, Craig had a very successful year, financially. Keeland was now 25, with a comfortable sum of money in the bank.

It was then that Keeland decided to focus on his own nutrition. He astutely observed that people with lifelong healthy eating habits, looked and felt younger. He found the top nutritional food formulators in the country and put a team together to create a nutritional product made in a pharmaceutical lab. His original plan was to create something for himself. In a twist of fate, Keeland accidently ordered 5000 bottles of the formulation. He didn’t realize he had done this until his delivery arrived. His assistant asked where he wanted to store the delivery and he was quite surprised to see the stacks of boxes, when he was expecting only a few bottles. They had to store the 5000 in an empty office in his building. His assistant and others in the building began asking if they could try the product. It became a hit with everyone in the building and his nutritional company was born. Keeland’s entrepreneurial spirit was elated. ‘Living younger, longer’ became his mission and he coined the term ‘Youngevity’.

Keeland was the first to use pharmaceutical standards for a nutritional product.

This propelled Keeland to the forefront of the nutritional world, and his company brought credibility to formulating nutritional foods. His newly formed company, Heritage Corporation of America, made a profit in the first year, an unheard-of achievement at the time. Three years later, an avid fan of the product knocked on the door and told Keeland she wanted to buy the company. He agreed to sell and again, made a nice profit. His entrepreneurial spirit was soaring.

On the lookout for a smart deal, he invested in a bank that was on the verge of failing. His instincts told him he could turn things around in 5 years and put the bank back in excellent standing. He saw the opportunity and seized it.

Then in 1987, the 4th year of the turnaround, the three major sectors of the Texas economy collapsed – oil, commercial real estate, and banking. The state went into an economic depression. 12 of the 13 largest banks in Texas failed. 45 percent of all independent banks failed. Keeland advised the board of directors that the bank would not survive. He decided to leave and 18 months later the bank shut their doors.

Overnight, Craig went from having a robust, positive net worth to a large, negative net worth. Being a man of integrity, he immediately went to lenders and signed deficiency loans. He refused to declare bankruptcy and walk away from his debts. Within 7 years he had re-paid every single one of his loans.  Through it all, Craig kept his positive outlook and cheerful spirit. He was unflappable and knew his attitude could be of great encouragement to others.

After the bank collapse, Keeland returned to his passion, nutrition. With a very modest sum, he started a small company which grew rapidly over time.

This was when Craig began taking notice of the habits of people in their 60s. He observed some of them looked 80, some looked their age, and a few looked 20 years younger. His goal was that when he was 60, he wanted to look like he was in his 40s, too. He wanted to find the secret. It was then that Craig read a very influential article in National Geographic by Dr. Alexander Leaf. It was a study suggesting the people of the Vilcabamba Valley had a greater longevity than other groups.

His curiosity peaked, Craig traveled to the Vilcabamba Valley Rainforest, high in the Andes Mountains of Ecuador, South America to learn about the people and their lifestyle. Craig was deeply touched by the vibrant, loving and appreciative children he met there. They inspired him to co-found the Andes Children Foundation. The ACF proudly supports 13 schools in the Vilcabamba Valley of Ecuador. Their mission: To help improve childrens’ lives through education, by providing much-needed resources, learning materials, and teaching tools. The foundation exists to this day and is one of the proudest achievements of Craig’s life.

Over the years, Craig started, led and grew five very profitable nutritional companies selling health and wellness products all over the globe. He was in the nutrition business until the sale of his last company in 2017.

Craig has been a servant leader throughout his life. In this next phase, he looks forward to giving back to his country he so longed to serve after high school.

Life has brought him full circle. His future is dedicated to serving America and his President with all the positivity and passion he has brought to every area of his life.

CIS Publishing Company, founded in 1991 by Terry Minke, is a self-publishing consulting company and publisher specializing in “first-time” author manuscripts for worldwide distribution of Diverse Christian Subjects, American Cultural Literature, as well as Wellness and Nutritional Books. Having published a total of 45 books to date, the company is currently based in Rural Retreat, Virginia. Visit CISPublishing.com to learn more.

For inquiries about this news release, please contact Kristina Blake at 31,000 FT: kristina@31000ft.net

In His Latest Book, Craig Keeland Shares Inspirational Messages That He Learned Along His Journey From Dyslexia to the Wharton School of the University of Pennsylvania, and Beyond
Craig Keeland releases his second book, 'Vision to Victory,' on living triumphantly
31,000 FT. - Dec 19, 2018

In His Latest Book, Craig Keeland Shares Inspirational Messages That He Learned Along His Journey From Dyslexia to the Wharton School of the University of Pennsylvania, and Beyond
Craig Keeland releases his second book, 'Vision to Victory,' on living triumphantly
31,000 FT. - Dec 19, 2018
Newswire