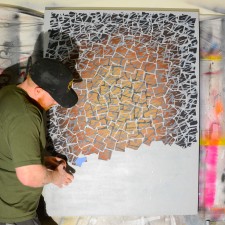 LOS ANGELES, California, October 7, 2020 (Newswire.com) - ​​​​Mike Habs has collaborated with musician Justin Courtney Pierre of Motion City Soundtrack and director Caleb Des Cognets in a music video project “Everything That Hurts.” The project has been archived by the Stonewall Museum in Wilton Manors, Florida.

Born in 1987, Mike is originally from Chicago’s South Side and is a second-generation Irish-American citizen. Growing up in Chicago, he developed a strong resonation with Punk Rock music, and its significance grew out all boundaries.

From the fight against child malnutrition to gender equality or animal rights, contemporary art can be used to instill positive change in a global society. To get involved in social causes and defend an idea with their figure, certain artists ventured on the route of activism and left their mark on the long search for a better world every day.

The rapprochement between art, politics, and social movements has been accentuated in recent decades. From the eighties, the immersion of the artistic took another tint in social movements. At that time, artistic resources were an empathic alternative and approached different population sectors for social causes.

These artists become representative of social causes, modifying their aesthetics, formats, supports, among others. Art movements have helped promote the participation of large masses. Therefore, their aesthetic and cultural practices can establish their recognition in a social function, directly relating them to the commitment to citizenship.

Similarly, Mike has demonstrated an ability to differentiate his approach and not follow an average artist's typical route. Based in Los Angeles, he has managed to earn national and international recognition and be featured on AAA media outlets. He has developed a consistently growing fraternity of fans who marvel at the beauty of his work.

This project raises awareness and grows in solidarity with the staggering numbers of LGBTQ+ youth who have committed and attempted suicide. Mental health issues surround this marginalized community and extending support and help for the affected makes a difference.

Habs ventured out in self-producing this project, and it earned milestone success. It uses metaphorical accounts in its depiction of LGBTQ+ suicide.